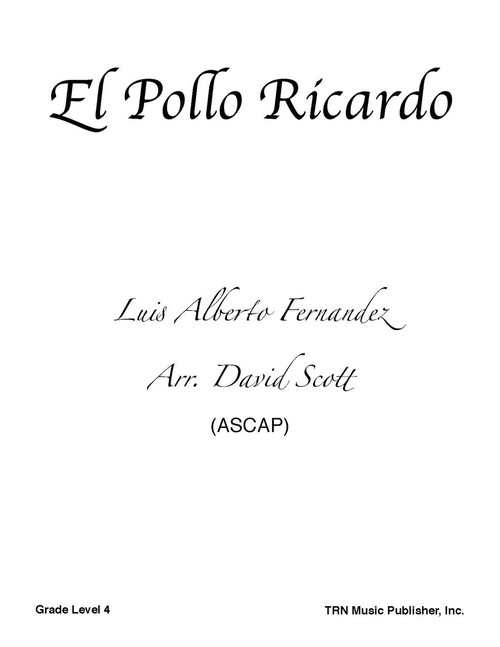 El Pollo Ricardo was written in 1911 by Luis Alberto Fernández, a young man from Uruguay who was a policeman by day and a tango musician at night. The title refers to a tango dancer friend of his named Ricardo Scandroglio, whom he affectionately called “Mi Pollo”. Pollo is Spanish for “chicken” - maybe he was an awkward dancer?! The tango became very popular in the 1940’s in Argentina when the orquestra of Carlos Di Sarli recorded it three times. There have been over thirty other recordings of this fun little character piece throughout the years.

As with most tango music, this piece is all about character. The fun in this music comes from the contrasts (piano and forte, staccato and legato), which can be exaggerated to an almost comical extent. The opening staccato bowstroke should be very dry and short, off the string close to the frog. The effect will be much like the clucking of a flock of chickens (although hopefully more synchronized)!

The pianissimo in bar 48 can be almost inaudible, with the forte seven bars later coming as a complete surprise. The pianissimo can be accomplished by using very little bow, almost “ghosting” the notes.

The violin solo (m. 56) can be very free rhythmically. The written rhythm is just a suggestion, and the soloist should feel free to take time wherever they like, as long as they make it up by fitting in the rest of the notes before the next downbeat.

The final two notes (loud-soft) may feel uncomfortable at first, but it’s a traditional tango ending that works in spite of (or because of) its silliness. When done correctly, the audience can’t help but smile!