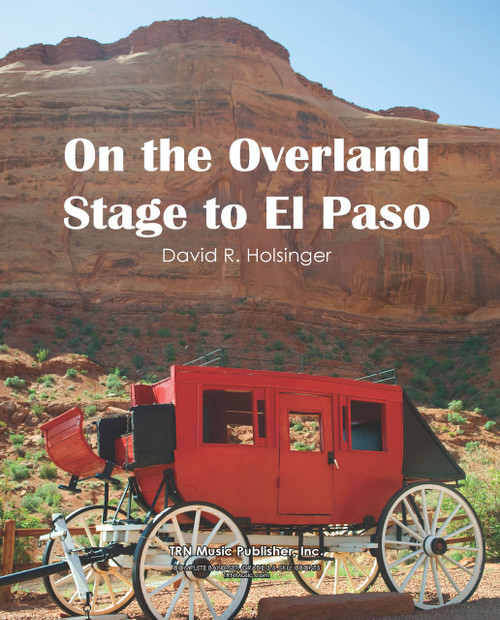 On the Overland Stage to El Paso

On the Overland Stage to El Paso

Between 1851 and 1881 a series of Stagecoach contractors carried the United States mail and passengers westward from San Antonio to El Paso. During various periods, the stage line also served Santa Fe, New Mexico and San Diego, California. In November of 1851, the first mail was dispatched by stage line west and by December, passenger service also, despite the continual threat of Indian attack. The original stage line operated for several years at a loss because of Indian attacks. In 1857, the Giddings-Birch Stage Line won a government contract to furnish mail service between San Antonio and San Diego on a semimonthly basis; this San-San was said to be the first American transcontinental mail and passenger service. The first California mail departed San Antonio on July 9, 1857 and reached San Diego on August 30 after an arduous passage. Over the next year, the 1,476-mile biweekly journey was made in an average time of twenty-seven days; the record was twenty-one days. For passengers, the one-way fare, including meals, was $200. During the Civil War, the stage line changed governments several times and continued to survive as best it could, crippled by hostile Indians and either Union or Confederate raiders, depending on who was in control at any given time. Eventually, the line was suspended for the duration. The stage line revived service in April 1866 and was led by general superintendent, Benjamin Ficklin, who directed the field operations. Ficklin rapidly became the dominant figure in the business. He had served as a route superintendent for the Central Overland and Pikes Peak Express Company and had overseen the establishment of the Pony Express. Ficklin reinvigorated the Texas line by rerouting the stages toward the Middle Concho River before turning west to Fort Stockton and established branch routes that served Northwest Texas, Arkansas, and the Indian Territory. When Ficklin died in 1871, his assistant, Francis Taylor, took over. Taylor enlarged the companys headquarters on the Middle Concho and named the village Ben Ficklin in honor of his friend. He was instrumental in the organization of Tom Green County in 1874, and in January 1875 the growing community of Ben Ficklin was chosen as the county seat. Despite declining revenues and losses to the Indians, the stage line functioned until the Texas and Pacific Railroad reached El Paso on January 1, 1882, and put the stage company out of business The San Antonio-El Paso Stage Line rarely turned a profit for its successive operators, but it did have a favorable impact on the states development. The introduction of a regular means of commercial transportation and the establishment of a chain of fortified relay stations along the road west to El Paso encouraged travel and settlement in the region.