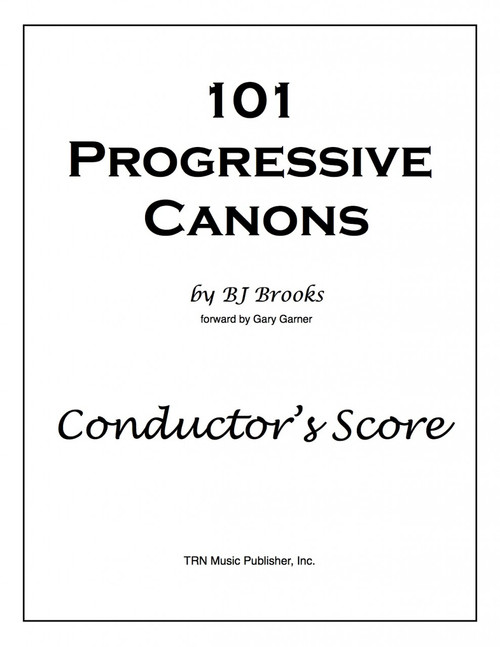 A Complete Set of 101 Progressive Canons includes the following: 1 x Conductor's Score plus 5 student books for a total of 6 books:

Of course you can order as many individual books as you need for your band.

The fundamental purpose of this book of canons is to help promote sight-reading skills. Practicing sight reading is obviously not possible until the student has reached at least a minimal level of competence. Lacking that competence, there's no way to know when rhythmic errors occur. When having to coordinate with another player, however, those errors become immediately evident. Canons are the ideal vehicle for meeting that need. Moreover, I'm sure most musicians would agree that there are few things more enjoyable than playing duets.

Canons at the unison or octave offer the opportunity to learn a single line together, whether it be two players or an entire ensemble. Once it's well in hand, it can be played in canon, thus helping lead the students toward rhythmic independence. If it's in full band, the two parts can be divided in a wide variety of ways: brass and woodwinds; boys and girls; alternate players, etc. Students can also play the canons on their own, outside the rehearsal, irrespective of what instruments are involved. It could be flute and tuba, trumpet and bassoon, or any number of other combinations. No doubt the imaginative director can find a wide range of little competitions and other means to encourage band members to work on the canons outside class. One especially productive approach is to combine a more advanced player acting as the "teacher" with a less advanced player, the "student."

My colleague, Don Lefevre, and I worked on canons rather extensively with two middle school bands and one high school band and found, to our great delight, that they accomplished exactly we'd hoped. The students were extremely receptive and their rhythmic skills showed demonstrable improvement. Incidentally, we used the Eastman counting system and the sub-divided foot tap (down-up for simple meter and down- press-up for compound) as an integral part of the instruction.

Our expectations having been proved, we approached Dr. B. J. Brooks about writing a series of canons in progressive difficulty, the result of which is represented here. In addition to being a gifted composer, Dr. Brooks brings a special understanding to the project as a result of having been a public-school band director himself. -Gary Garner