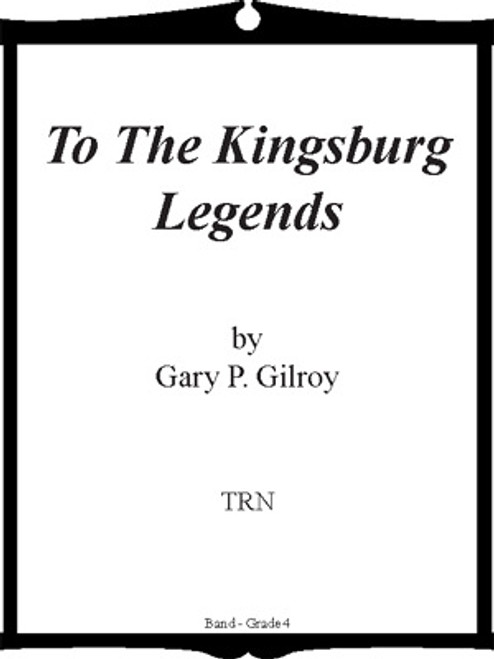 To the Kingsburg Legends

To the Kingsburg Legends

Kingsburg, California is a small Swedish community about 20 miles south of Fresno, California. The Kingsburg Community Band has a history dating back to their first conductor, Lars Claus, who led the band from 1887 to 1888. Thirty directors later and about 30 years later, Dale Engstrom became the director of the band and continues today conducting concerts in the park on Thursday evenings during the summer months. In the late 1990’s, Dale Engstrom invited Dr. Gary P. Gilroy to guest conduct the band on one of those Thursday evening concerts and he also invited him to compose a march for the band. Gilroy accepted the challenge and began to look for inspiration.

Gary P. Gilroy had a great respect and admiration for the town of Kingsburg and the musical offspring the area had to boast. “What was in the water in that town?”, Gilroy asked himself. The town had only one high school and yet, they always had a very fine music program (Dale Engstrom was also the music teacher at the high school at that time) with students making the all-state bands and choirs. Students coming out of the program and making it in the musical world were people such as Dale Engstrom, who is now Director of Bands at Fresno City College, and his brother Dr. Larry Engstrom, who currently serves as the Director of the School of Arts at the University of Nevada, Reno. Their father, Wally Engstrom, served as the conductor of the Kingsburg Community Band off and on from 1958 through 1980.

Another Kingsburg product, Paul Shaghoian served as a graduate assistant to Dr. Gilroy in the mid 1990’s as he worked on his master’s degree at Fresno State, but, prior to that, Paul played trumpet on tour with the Glenn Miller Band as well as lead trumpet in the North Texas One O’Clock Band. Shaghoian’s Buchanan High School and Alta Sierra Intermediate School Jazz Bands were perennial favorites for annual Downbeat Magazine Awards. Paul Shaghoian’s sisters were also very successful. Susan Shaghoian is a music educator in Tulare, California and took over as Director of the La Sierra Music Camp when Paul died an untimely death from a heart attack in 2004. Vicki Shaghoian, another of Paul’s sisters, teaches music at Yale University and sings professionally in New York City. Another great trumpeter to come from Kingsburg is Scott Englebright, who was a former lead trumpet with the Maynard Ferguson Band as well as the Wood Herman Band. Bill Thornby is a Songwriter from 20th Century Fox and MTM Music, and Brent Weaver received his DMA and is now a Professor of Music at George Fox University. Vince Villanueva is currently working for Dreamworks and American Idol in the music field. The list could go on but space is limited.

So when Gilroy wrote his march for the Kingsburg Community Band, he wanted to write something as a tribute to the many great music teachers and performers that have come from this wonderful little gem of a California town. He felt that the town seemed to produce a “legendary” collection of music teachers and musicians, and he offers this simple fanfare and march as a salute to the many musicians mentioned above as well as the many others far too many to list here.