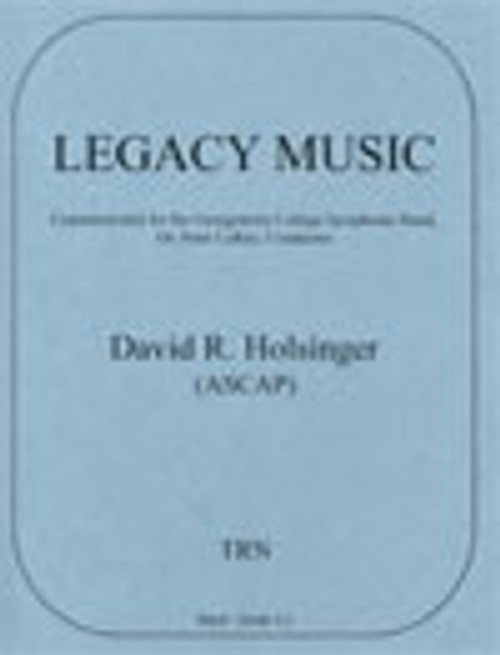 Several years ago, Dr. Peter LaRue, the Director of Bands at Georgetown College in Kentucky, approached me about writing a work for his concert ensemble, the Georgetown College Symphonic Band. He suggested that the proposed piece be modeled after the tune of the college Alma Mater. That tune was a 1926 hymn entitled, "Are Ye Able, Said the Master," found in a number of denominational hymnals to this day.

The hymn itself was written by Earl Marlatt and Harry Mason, both affiliated in 1926 at the Boston University Theological Seminary School of Religious Education. Marlatt was asked to pen the words for a hymn for a consecration service and Mason, an organist at Auburn Theological Seminary and a graduate student at Boston University, composed the music.

Georgetown College was the first Baptist college founded west of the Allegheny Mountains. In 1829 Silas Noel, a Frankfort lawyer, jurist, and minister, led twenty-four Baptist leaders in persuading the Kentucky legislature to charter the Kentucky Baptist Education Society, which considered locating the college in several counties and on the Transylvania University campus in Lexington. Instead, the citizens of Georgetown convinced the Society's trustees to establish the college in their community by offering to raise $20,000 and by donating the assets of the defunct Rittenhouse Academy, which included a fifty-two acre campus and land in western Kentucky. Rev. Elijah Craig, a Baptist minister, founded the Academy, in 1798, a land grant school for the community, after his 1787 classical school had failed. The college traces its roots to that early school.

The first decade of Georgetown College's existence was precarious, but nearly 210 years later a vibrant Christian community of 2000 students under the guidance of over 150 faculty pursues degrees in 39 undergraduate majors.

I was inspired by the stories of the turbulent early history of this school. Decade after decade of sacrificial service exemplified by men and women of faith seem to call out from the past. Matthew 11:12 reads, "From the Days of John the Baptist till now, the Kingdom of God has been forcefully advancing, and forceful men take hold of it."

This work commemorates the LEGACY of those forceful men and women of faith and their desire to establish a haven of Christian Education two centuries strong. ~ David R. Holsinger