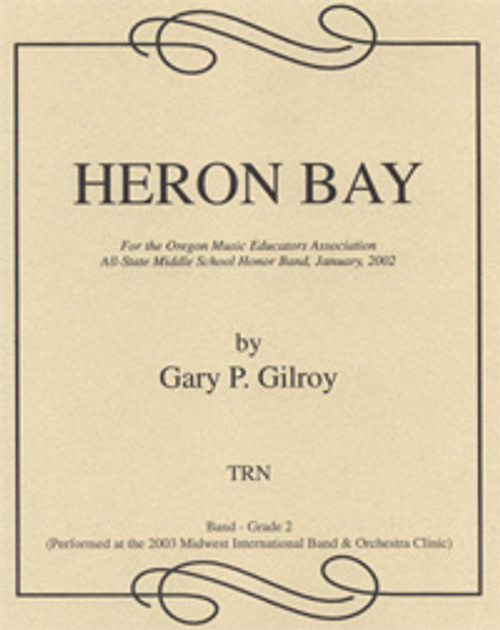 This concert band work is the first movement of a suite in progress based on the poem of the same title written by Dr. Martin Galvin:

There is a space for winter here to grow its ice. There is a place for a small boat with oars and sail. There is a piece of water here for a fish farmer and his old wife, turned by the wind into the wind. We say the night heron stands and waits for breaking water. He knows that water yields, that fishes break. His neck is a white slake fishing for the waters sake and his. He takes only his place which is as small as he needs. He leaves the rest to you and me, a small boat, winter and a pair of old crabbers leaning in the wind, space for oceans to turn in, things that bend.

The composer, Gary P. Gilroy, attempts to capture some of the spirit of Heron Bay in this selection, which will become the first movement of a suite based on the same name. The movements will eventually be renamed:

Dr. Martin Galvin is a poet from the Washington, D.C. area who has always been a source of inspiration to this composer, who also happens to be Dr. Galvins nephew. Dr. Gilroy has long had a desire to compose a work for concert band that would be based on some inspiration from his Uncle Marty and today Heron Bay fufills that goal. This lighthearted movement is meant to exude an Irish spirit as a tribute to what Gilroy remembers of Dr. Galvins proud heritage. The concert band setting of this work was premiered by the Oregon Music Educators Association All-State Middle School Honor Band with the composer conducting in Eugene, Oregon, on Friday, January 25, 2002 at the Annual Convention of OMEA.