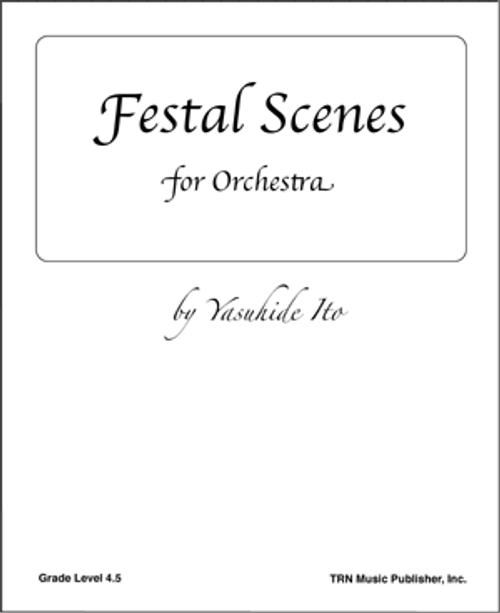 Festal Scenes was originally composed for band in 1986 based on four folk songs from the Aomori Prefecture of Japan: Jongara-jamisen (a kind of Shamisen - a Japanese traditional guitar with 3 strings, its motif appearing at the beginning), Hohai-bushi (sung like the Yodel, appears at bar 75 in the flute), Tsugaruaiya- bushi (at bar 85 in the bassoon) and Nebuta-festival (its typical rhythm appearing at bar 125).

The piece will be effective if Bass Drum is played with the thin bamboo sticks hitting like 'rim shot' from 125 to 150. Tebiragane (or called Chappa) is a very small cymbal or large antique cymbal like instrument. It is substituted by hitting at the center of a Suspended Cymbal with a stick.

The original band version was commissioned by the Ominato Band of the Japan Maritime Self Defense Force in 1986. It received its premiere performance in Japan on October 28, 1986, under the direction of IWASHITA Shoji and received its American premiere at the American Bandmasters Association Convention in Knoxville, Tennessee, in 1987, by the University of Illinois Concert Band, James Keene, Conductor, with the composer serving as guest conductor. Since then, many bands including the United States Air Force Band and the Tokyo Kosei Wind Orchestra have performed this piece, and it is regarded as one of the most popular pieces of Ito.

This orchestral version was commissioned by Karasu-gawa Ongaku-Shudan Junior Orchestra. And its premiere performance was on July 26, 2000, under the direction of KODAMA Ken'ichi.