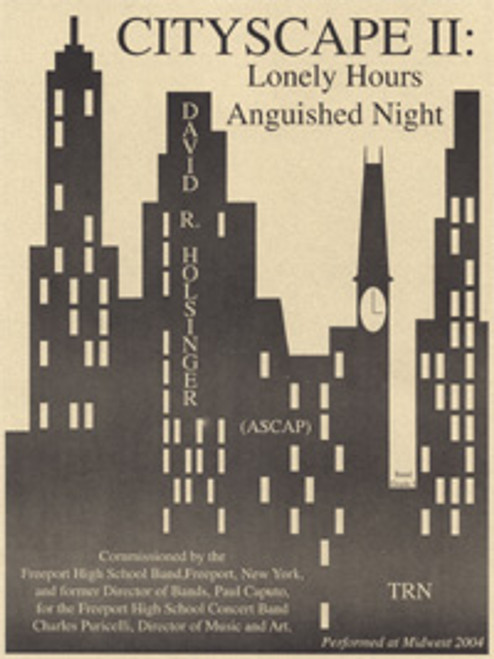 Usually when I fly to the New York City area, I tend for whatever reason to land in Newark, New Jersey, but a couple of years ago, on a trip to Long Island, New York, my arrival destination was the sometimes scary, but always aviationally historic LaGuardia Airport. As far as I am concerned, the magnificent view of New York City Harbor and the pass by Manhattan up the East River is the most magnificent seven minutes view imaginable. The inspirational panorama of the Statue of Liberty and Ellis Island combined with the density and magnitude of New York City is incredible when viewed from a few thousand feet overhead! CITYSCAPE II is Act Two of a three-part series of compositions inspired by that short flight. As CITYSCAPE I celebrated the festive early evening of a vibrant, pulsating city, CITYSCAPE II moves into the deeper night, the darker side, the lonely hours predeeding dawn. It is a two-sided coin, one side quiet and despairing and the other, ripe with the kinetic energy of pursuit and danger. It is a prelude, however disturbing, that will presage a thankful dawn emulating the promise of salvation light!