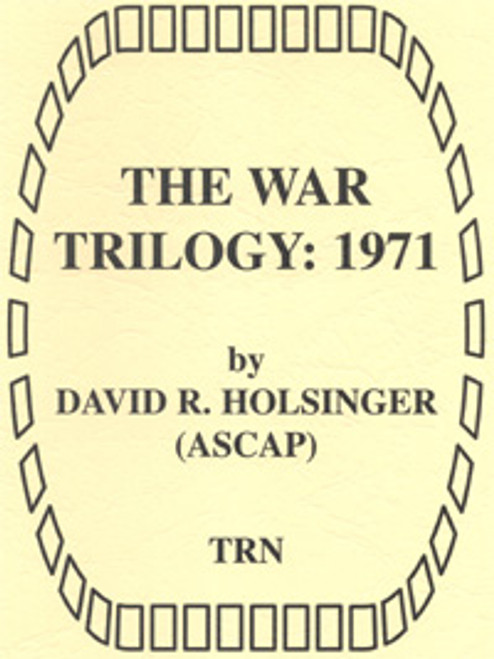 In the early spring of 1971, less than 10 months following the tragic deaths of several students during the anti-Vietnam War demonstrations on the campus of Kent State University, The War Trilogy was awarded first prize in the Kent State University Band Composition Contest. The juxtaposition of numerous circumstances makes this musical event unique, not in the least, the fact that the composer was, at that time, a member of the United States Army serving with the Third Infantry Division. Originally entitled "After Armageddon: A War Trilogy", the third movement, Fanfare, had been awarded First Prize in the 1970 Federation of Music Clubs composition contest. With the additional two movements, it was entered in the Kent State competition in December of 1970 and awarded that prize in early March. Considering the time frame of its creation, one may assume that the Trilogy was written as an anti-war protest to the Southeast Asian situation. In retrospest, it is rather a diorama of the waste and sadness of any such conflict. The Trilogy is not anti-war, neither does it glorify war, it is simply one man's impression of the effect of war, and its undeniable destruction of the human spirit. Although the sparing use of percussion might be considered a major difference in assigning this piece to this particular composer, the paramount element that sets this piece apart from the composer's other works is the harmonic language utilized in its construction. Although it utilizies a 12-tone technique, it is not atonal, nor is it pandiatonic in the Schoenbergian sense. It is constructed with an attempt to use the 12-tone row as a synthetic scale, but without a definite predisposed tonal display order. Although the style of writing does not differ greatly from the composers other works, the choice of harmonic language was an esthetic one. It was the correst choice, at the time, to effectively paint the appropriate portrait and sound a despairing alarm.