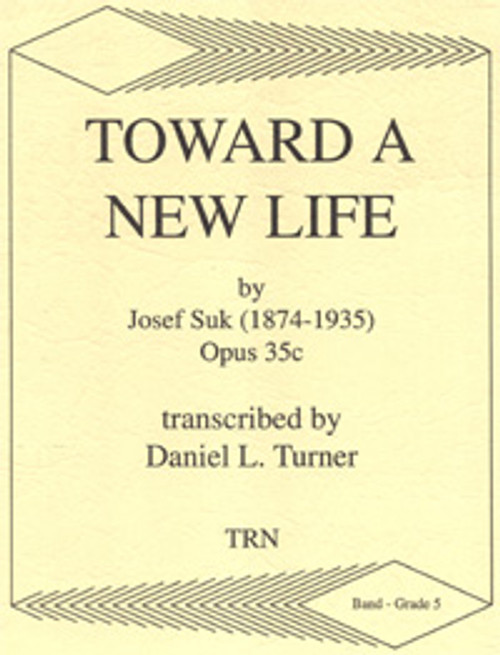 Toward a New Life

Toward a New Life

Josef Suk (1874-1935) was internationally renowned as a composer, teacher, and violinist in the early years of the Twentieth Century. He entered the Prague Conservatory in 1885 as an eleven-year-old and studied violin, music theory, and composition. In 1891, he became the student of Antonin Dvorak, who was then professor of composition at the conservatory. After he completed a year of study with Dvorak, Suk embarked on a career in composition, taught at the Prague Conservatory, and became a member of the famed Czech String Quartet, with whom he performed over four thousand concerts before his retirement in 1933. Suk married Dvorak's daughter, Otilie (Otylka) in 1898, and later served four terms as Rector of the Conservatory. He was appointed to fill the Conservatory's chair of composition in 1922, and as a teacher, passed Dvorak's influence to the next generation of Czech composers and performers, including Boshuslav Martinu and Suk's grandson Josef, a great violinist in his on right.

As a composer, Suk's music won the approval of Brahms, who recommended Suk's work to his publisher. By the turn of the century, Suk was regarded as the leading composer of the modern Czech school. Suk was greatly influenced by Dvorak and he was especially comfortable with instrumental music - - piano, string orchestra, and orchestra. Though his music is clearly Czech, it is not inspired by folk idioms. Toward a New Life is an example of Suk's heroic, late-Romantic style.

Toward a New Life, Op. 35c, was first sketched in April 1919, when the Czech army was called into action to protect the southern districts of Slovakia. Patriotic fervor was running high when Suk produced the three highly evocative works of which "New Life" is a part. In its first version, the march was combined with the two other patriotic works, Meditation Upon the Chorale of St. Venceslaus and Legend of the Victorious Dead, to form Opus 35. The march, however, was sketchy, containing only a 20 measure first and second strain and a 40 measure trio. For the autumn 1919 music festival sponsored by the Czechoslovak Sokol Organization, Suk entered the march, arranged for piano duet, with an added 31 measure fanfare introduction and was awarded first prize. He then expanded the march and scored it for symphony orchestra. At its premiere in June 1920 at the Sokol Festival in Prague, the march proved so popular that it was named the official march of the festival and was used yearly for the Festival Parade until World War II. In 1932, Toward a New Life again earned Suk a first prize, this time at the musical contest held in conjunction with the 1932 Los Angeles Olympic Games. During World War II, the brilliant opening fanfare was used as the radio signature for broadcasts of the Czechoslovakian Government in exile.