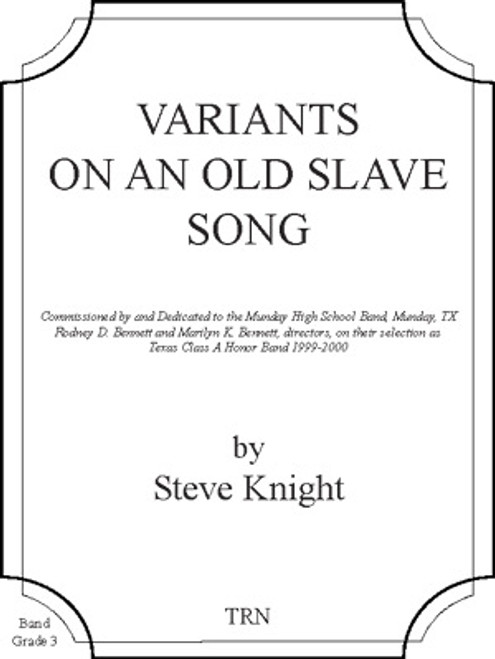 Variants on an Old Slave Song

Variants on an Old Slave Song

Variants on an Old Slave Song was commissioned by and dedicated to the Munday High School Band, Munday, Texas, Rodney and Marilyn Bennett, directors, on their selection as Texas Class A Honor Band in 1999. It was premiered at the Texas Music Educators Association Clinic/Convention in San Antonio in February 2000. The piece is a set of variations on "Michael, Row Your Boat Ashore," an African-American spiritual which was first published by William Francis Allen in 1867. The work was inspired by the composer's visit to the National Civil Rights Museum in Memphis -- the site of the former Lorraine Motel where Dr. Martin Luther King was assassinated in 1968.

At the beginning, the conductor may choose the soloist from flute, oboe, alto saxophone, trumpet, horn or euphonium/bassoon. Feature your best player! Do not take the section at measure 49 very fast (ca. MM=120). Please do not let the ensemble rush! The tempo at measure 91 is lively and spirited (ca. MM=132). A nice energetic bounce style will bring the work to a successful close. The timpani solo at measure 114 should be brought out.