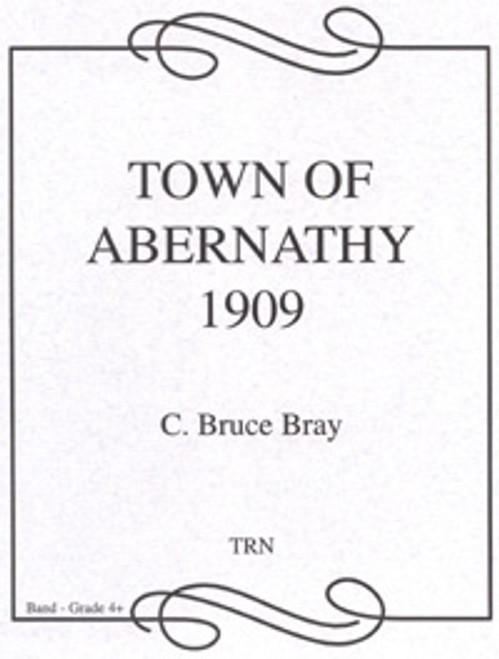 Town of Abernathy 1909 began when my dear friend, Mr. David Lewis, asked me to compose an alma mater for the new middle school where he was director of bands. The result became the lyrical middle section at measure 81. Sometime later Mrs. Gail Grigg of Sherman, Texas inspired me to write a march for her husband and children. I composed the beginning brass fanfare at measure 53 for that particular incarnation. The piece was completed when I took the measure 53 material and treated it in a minor tonality in 6/8 time. This became the a theme at measure 21. I decided to dedicate the final resulting work to my hometown of Abernathy, Texas, est. 1909. It was there where I began my love affair with music and where I was inspired and influenced by many colorful characters of that small town. My undying thanks go to my wife, Karen, Mr. Chris Tucker, who gave the piece a much-needed facelift and to my daughter, Ashley who persuaded me to let him hear it. Also, thanks to my dearest friend, Mr. Alan Lawrence of Cedar Rapids, Iowa, who gave Town of Abernathy its first spank on the behind and heard its first cry.