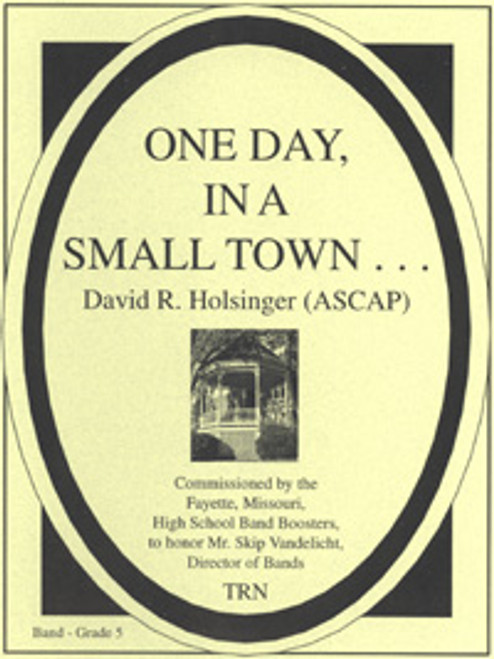 One Day, In a Small Town

One Day, In a Small Town

In 1977, a young Skip Vandelicht graduated from Central Methodist College in Fayette, Missouri, and without moving more than three-quarters of a mile, secured his first job at the local high school. He probably thought that this was a good first job, close to his mentors, and in a small town where he couldnt do much damage until he got his feet wet and where he could be eventually ready to move on to that bigger school somewhere out there . . . Several years ago, the Fayette High School Band Boosters asked me to compose a work to honor a slightly older Skip Vandelicht in celebration of his 27th year in his first job. In his tenure in that small American town, this gentleman has managed to become the President of the Missouri Bandmasters Association, performed numerous times at the Missouri Music Educators Convention, direct a High School band program that has earned top ratings at State Music Festival for 25 years, be honored with his colleges Young Alumni Award, and in the process, snag Bandworld Magazines Legend of Honor Award in 2003! But the greatest honor that can be extended to Skip Vandelicht is this: That he has the admiration and love of parents and students who have been inspired for twentyseven years, by this man, to achieve their best at all times. And though this work was written as a nostalgic look around Fayette, Missouri, from ghostly echoes emanating from the city bandstand on the Courthouse Square . . . to hijinks in the park . . . to cruising down the local highway . . . it is more about all those Band Directors, in ALL the small towns of America, who, like Skip Vandelicht, have dedicated themselves to teaching children, the childrens children, and perhaps a few grandchildren, always continuing to be immeasurable heroes in the eyes of their communities.