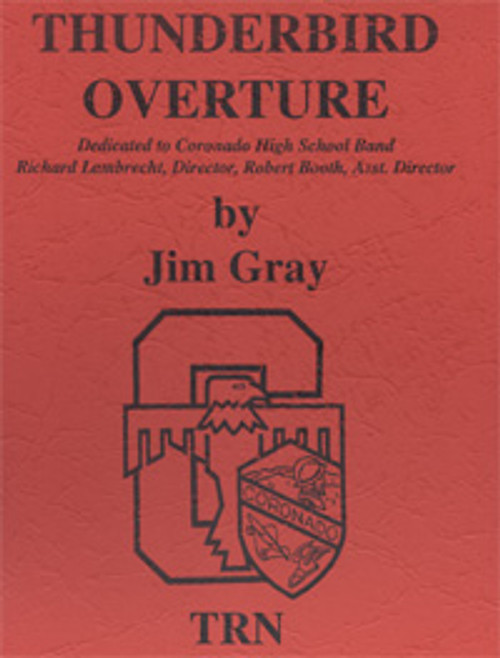 Thunderbird Overture was composed during the fall of 1994 for the Coronado High School Band in El Paso, Texas. The name "Thunderbird" is taken from a mountain in the Franklin Mountain Range, around which much of El Paso is situated. Upon this mountain, red-rock coloration in the general shape of a thunderbird was chosen as mascot of nearby Coronado High School. Scored for conventional symphonic band, this work employs an expanded percussion section which features all of the mallet instruments, multiple percussion combinations, and the recommended use of five timpani. The scoring for winds is standard, including all the instruments. Primarily, Thunderbird Overture employs conventional melodic structure, supported by tertian harmony with extensive use of polychordal treatment. The rhythmic structure is quite active, utilizing conventional metric divisions with sections of asymmetrical meter. The overture features ABCBA arch form, containing three distinct sections: a fanfare depicting the feel oftriumphant victory, an allegro section representing in spirit the persistent devotion to excellence, and a love song, not to be received, but to be given, the love for music. These themes produce a well-rounded shape that retains its distinct qualities and reminds us of what music is all about. The three sections of the overture are also representative of the personalities and interactions of the Coronado High School Band to whom this work is dedicated, and, as well, the interactions of high school bands everywhere. The depicted feel of triumphant victory can represent any aspect of musical achievement, and of that glorious glowing feeling which accompanies the final success. The pursuit of excellence is a never ending process born of the desire to strive for perfection, fueled by the beauty of dreams, and driven by relentless persistence. The finest things there are in a high school band have this prime ingredient. And finally, the love song of the overture represents the many ways love can be expressedby the playing of music, such as, a continuing devotion to music, to audiences, to a band, and to each other. It is what music itself is all about: some of the finest expressions of life we all have.