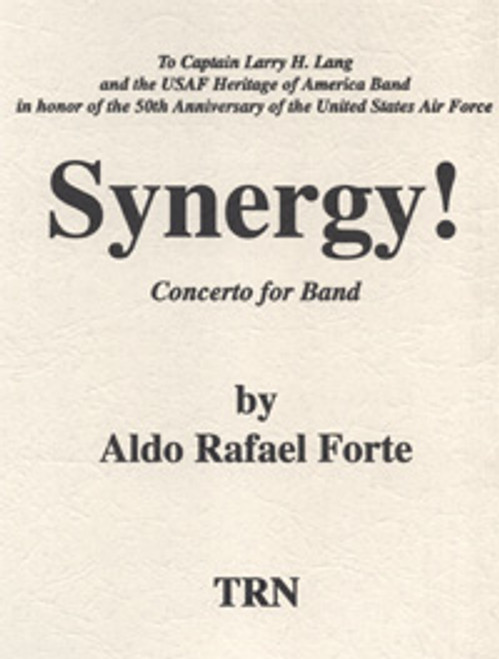 Synergy! Concerto for Band SYNERGY! is an energetic work for band of about eight minutes in length. It was composed during the first two months of 1997 and is dedicated to Captain Larry H. Lang and the USAF Heritage of America Band, Langley AFB, Virginia, in honor of the Fiftieth Anniversary of the United States Air Force. The band premiered the work in February, 1997. The composition is cast in the form of a concerto for band showcasing the instruments and sections of the ensemble. SYNERGY! opens with a lively and bombastic tutti introduction based on a diverse set of ideas contrasting thirds and fourths. These ideas form the basis for the entire work. Following a tumultuous climax the volume is drastically reduced (43) and the "concerto" aspect of the work begins. First "softer" woodwinds are spotlighted (solo flute, solo alto sax). Eventually a "rude spanish trumpeter" begins to intrude upon the alto saxs solo (89)! Afterward the solo trumpeter "steals the show" from the alto sax and forces the entire band to follow him in his bravura statements (100). At (120) the volume is decreased once again. Instruments and later sections are featured in order of their progressive intensities (solo clarinet, solo horn, horns, trombones, bass trombone and trombone section, and tuba solo), the effect being one of a continuous crescendo. A short tutti statement (219) leads to a percussion section feature (228). Later sections pass in "quick review" one final time (267-282, high woodwinds, clarinets, saxes, euphoniums). The texture becomes more complex and the piece ends in a jubilant mood with the entire ensemble once again "put back together"! As the title implies, SYNERGY! is a musical depiction of the coming together of many individuals for the cause of the entire group. In this way, this concerto for band is indeed a tribute to the United States Air Force.