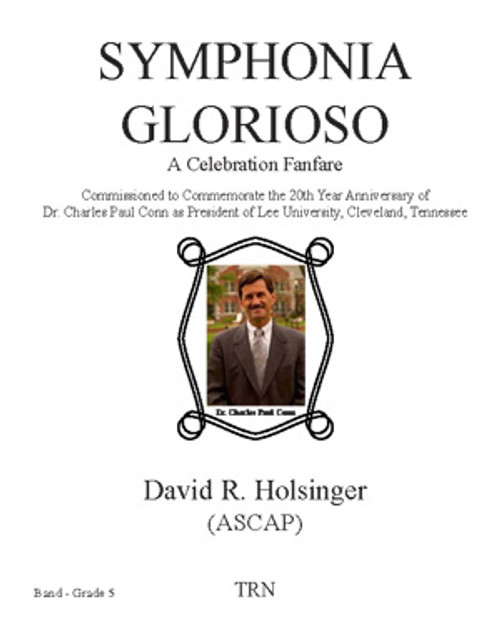 This celebration fanfare, SYMPHONIA GLORIOSO, was commissioned by Lee University to honor its President, Dr. Charles Paul Conn, as he completes his 20th year at the helm of this private, comprehensive university located in Cleveland, Tennessee. During his years as president, the university has seen significant growth: enrollment has tripled, the budget has quadrupled, and the physical campus has been substantially enlarged and rebuilt with twenty major buildings added to serve the student body since 1986. Paul Conn has served the university as a faculty member in the Department of Psychology for 15 years, as Vice-President of Institutional Advancement, and finally, for the past two decades as President. In addition to his scholarly publications, Paul Conn has enjoyed a second career as a freelance writer. He has authored or co-authored 20 popular books, sharing by-lines with personalities such as Johnny Cash, Pro-footballer Terry Bradshaw, and successful businessmen, Jack Eckerd and Richard DeVos. As part of a year-long celebration, David Holsinger was commissioned to write this fanfare to open the festivities in the fall of 2006. Based on one of Dr. Conns favorite hymns, the 1906 Charles P. Jones hymn, ALL I NEED, the fanfare opens with penetrating percussion and jagged brass outbursts, interjecting fragments and phrases of the hymn as it propels toward the final chorale and riveting conclusion.