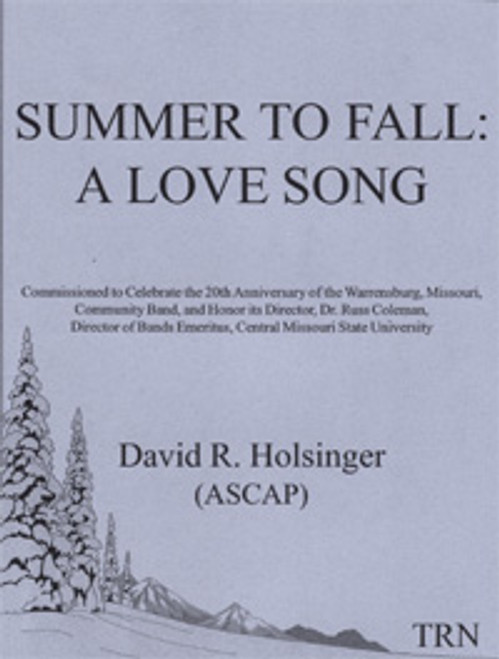 Summer to Fall: A Love Song

Summer to Fall: A Love Song

Summer to Fall was commissioned to celebrate the 20th Anniversary of the Warrensburg, Missouri, Community Band and to honor its Director, Dr. Russ Coleman, Director Emeritus of Central Missouri State University. And that sums up the "official business stuff." On the "personal" side, Russ Coleman and his wife Alice have been friends of my wife and myself for . . . a whole bunch of years. My wife was in his university band, and I served as his Graduate Assistant at Central Missouri State in the years between 1967 and 1969. Under his leadership I learned a great deal about being an arranger, being a better band director, and getting a handle on how not to be so "full of myself" at age 22 and beyond! It's always difficult to write for friends because you really want to do the "best you can do." I wanted this piece to be "special" in every way. But to be candid, I had a hard time just getting started! After much thought, I realized that, especially in recent years, Russ and Alice as "Russ and Alice" have become even more treasured friends to my wife and myself than ever before. It became apparent that celebrating their wonderful partnership in life and in music should be the motivating focus of this composition. When Russ Coleman began his teaching career in rural Kansas many years ago, he needed a pianist to accompany his soloists at contest. He discovered that there was an elementary teacher who played piano and quickly recruited her to help. Two years later, Alice, the accompanist, became Mrs. Coleman. Some guys will do anything to keep a good piano player handy! And that's why I wrote A Love Song.