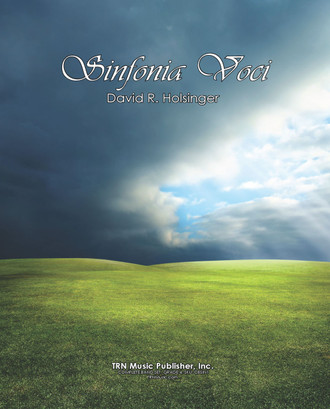 In the mid afternoon of August 28, 1990, a massive tornado swept through the center of Plainfield, IL, a community some 30 miles southwest of Chicago. This massive storm scythed a five mile long path, causing millions of dollars in damages and the deaths of 29 residents of the city. Plainfield High School was one of the building areas totally destroyed. In the fall of 1992, the Plainfield High School Band Boosters commissioned Holsinger to write a commemorative work for the High School Symphonic Band and Civic Chorus made up of many of the church choirs of the community. In the spring of 1993, after many years of relocation in Joliet, Plainfield High School returned to its community, and in a dedication service, The Plainfield Band and Civic Chorus under the direction of Scott Casagrande premiered the SINFONIA VOCI.