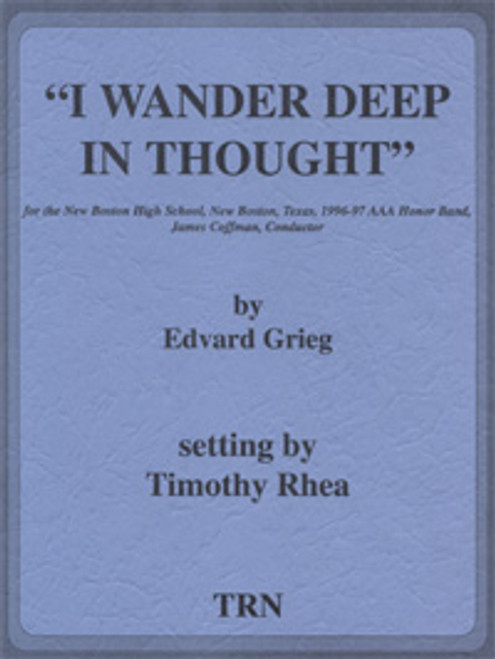 I Wander Deep in Thought

I Wander Deep in Thought

Edvard Hagerup Grieg (1843-1907) was a composer representative of Norwegian nationalism and is best know for his short piano pieces, songs, and incidental orchestra music to plays. Griegs music shows a great influence of Norwegian folk songs and dances. These national characteristics blend with a sensitive feeling for harmony in a personal, poetic music that has not lost its freshness. I Wander Deep in Thought is a solo piano work taken from Nineteen Norwegian Folk Tunes and is Griegs Opus 66. The band setting was completed by Timothy Rhea in the fall of 1996 for the New Boston, Texas High School Band and their conductor, James Coffman. The work was premiered at the AAA Honor Band Concert of the New Boston High School Band in February of 1997 at the Texas Music Educators Convention in San Antonio, Texas.

Performance Notes: From the beginning tempo and style indication of flowingly, a tempo of around 80 beats per minute seems to give the music an expressive character without leaning too much to the slow side. The entire piece should be approached with an extremely legato character in mind. Accents should be played with a strong empasis on the attack, but the notes should not be separated (i.e. measures 57-59). The melody should be easily heard at all times and great attention should be paid to the many dynamic and tempo markings that occur throughout.