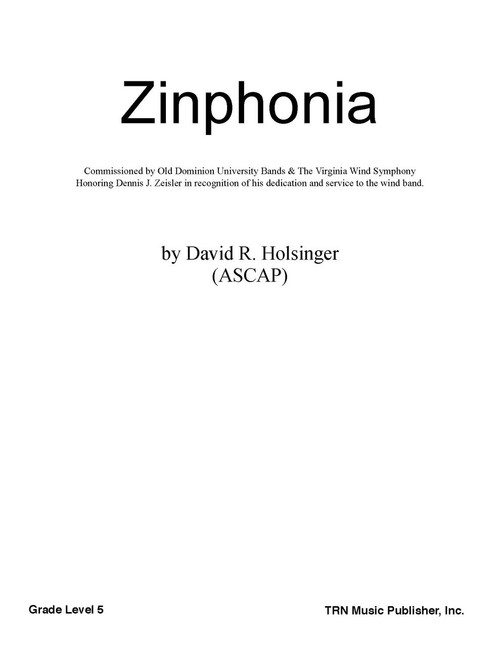 The English term, “sinfonia” or “sinphonia”, most commonly refers to a 17 th or 18 th century orchestral piece used as an introduction, interlude, or postlude to an opera, oratorio, cantata, or suite. In the Italian, the word simply translates as “symphony”, though nothing on the scale of, for instance, a Mahler symphony. Bach used the term for some of his keyboard compositions. Igor Stravinsky titled the first movement of his 1932 octet “Sinfonia”. The term has found resurgence in the Twentieth Century, especially since 1950. All this to say, that this composition has absolutely nothing in common with any of this musicology trivia!

Two years ago, when I was first approached concerning composing a special piece to celebrate Dennis Zeisler, I was thrilled and quickly accepted. Not only has he served Old Dominion University faithfully, but also the Virginia Wind Symphony for nearly a quarter century. He has been and is seen as one of the most outstanding and respected American bandmasters today, as proven by his election as the seventy seventh President of the prestigious American Bandmasters Association. Dennis has been a friend for a number of years and the first thing I did following my acceptance of this commission was to go out and immediately . . .. . suffer a stroke! Really.

Admittedly, it was slightly more difficult to write while dealing with the paralysis, but over time, and with the patient understanding of the Virginia Wind Symphony, at last, the piece was completed. Hopefully my tongue-in-cheek cognitive skills remained somewhat intact throughout the past year and half. One has to keep their wit during aggravating times. An “Overture for Dennis?” No, just not an overture, but a symphonic wind and percussion work with a bit of grandeur, a little poignancy, not so modern that it is unafraid to contain a melody or two, some rip-roaring “smash and crash” moments, some enjoyable technical passages, hopefully a little brilliance to show off his wonderful players, and gosh, something you don’t get with a lot of with “new music aesthetics” – I thought I might attempt to compose a work that an audience might actually like to listen to.

How about a 21 st Century “sinfonia?”

But wait! It’s for Dennis Zeisler! What should I name it? ZINPHONIA!