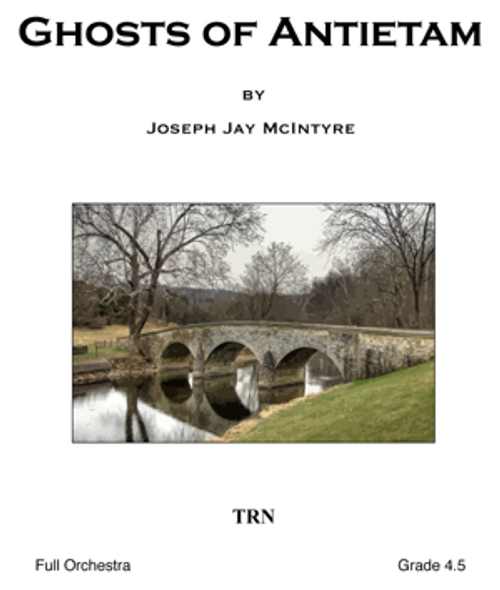 Wandering about the grounds of Antietam National Battlefield in Sharpsburg, Maryland, one can’t help but get a strong sense of the devastating carnage, which took place there in September of 1862. The Bloody Lane, the Burnside Bridge, and the Philip Pry House in particular are sites within the battlefield where some of the bloodiest fighting of the Civil War took place. These same places are now said to be haunted by spirits and other unexplained phenomenon. Many people claim to have seen soldiers in Civil War uniforms, or heard strange cries or eerie music emanating from the shadows, especially just at sundown.

“Ghosts of Antietam” opens ominously, as a lonely wind stirs across a barren cornfield, and the sounds of phantom soldiers can be heard marching in the distance. Slowly, the spirits start to gather and come to life as the strains of familiar old war songs beckon the spirits to come alive. The music intensifies with excitement until all the souls are summoned and congregate as the stirring music of the Civil War is once again played on the battlefield.

Many Civil War era tunes are incorporated into the piece, including When Johnny Comes Marching Home, Battle Hymn of the Republic, Gary Owen, Jefferson and Liberty, and finally, Taps.

“Ghosts of Antietam” is dedicated to the memory of the “Johnnys” from every war who will never come marching home.