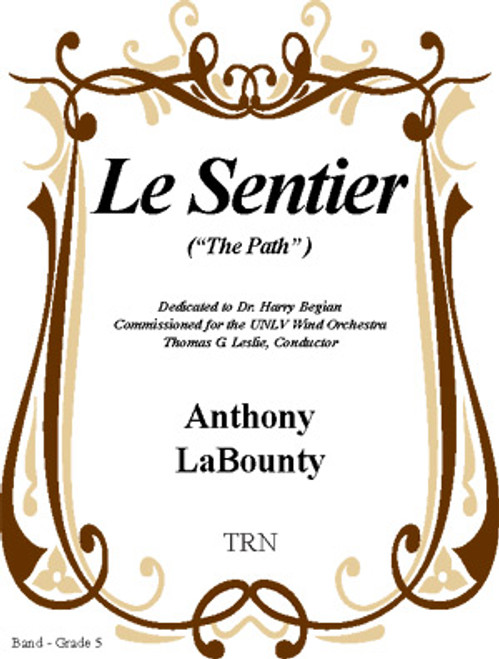 In June of 2005, I was invited to serve as a guest performer and musical arranger for the UNLV Wind Orchestra in special concert performances at the Festival des Anches located in the picturesque French Riviera town of La Croix Valmer. As part of the lodging amenities, my family and I were privileged to stay at a beautiful villa called "La Vieux Saunier." Rolling hills bordered by the Mediterranean Sea and the perfectly complimentary vineyards, orchards, wildlife and a tranquil lifestyle enjoyed by its citizenry became the impetus for the composition of Le Sentier.

Le Sentier, translated as the path or the way, is a musical rendering of my family's travels throughout France which begins with original thematic material evoking the pastoral environs unique to Provence.

A second but perhaps more prominent musical motive, is borrowed from the pre-recorded musical cue, vocalized by a female voice and repeatedly played on the public address system before the announcement of train arrivals and departures, and familiar to passengers at train stations throughout France. The third, gradual introduction of themes from the 4th movement of Bach's Cantata No. 140, Wachet Auf (BWV 140) includes the main hymn tune borrowed by Bach and written by Hans Sachs (1494-1576) with text written by Philipp Nicolai (1556-1608). These are also used to emblematize the main body of the piece reminiscent of our many excursions (a la caccia!) including those from Toulon in the south, to Caen in the northern region of Normandie, and on to the famed Val De Loire region. To represent the final leg of this memorable journey, Bayeaux to Paris, I chose the American hymn To God Be The Glory, signaling, with motivic restatements of the aforementioned themes, the final arrival to the person and place figuratively and literally more glorious than that of any great city.