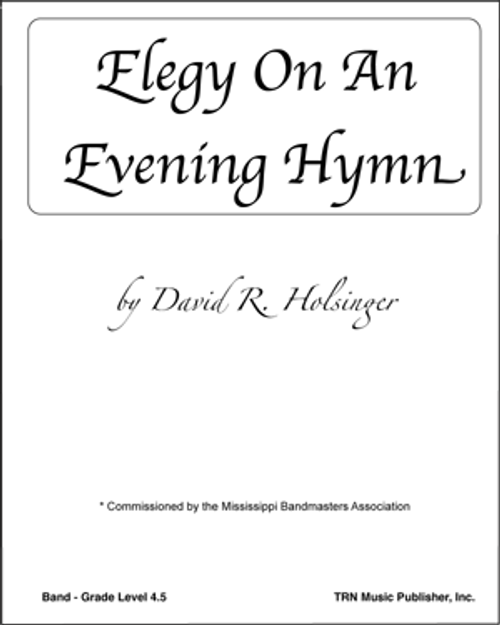 The ELEGY was commissioned by the Mississippi Bandmasters Association to honor the lives and legacy of the late Mr. and Mrs. John McArthur, long time band directors and the only husband and wife team ever inducted into the MBA Hall of Fame. In the annals of Mississippi high school band music, they were a legendary couple whose standards of excellence set the level for all others in the state to attain. However, as with all teachers, especially music teachers, their legacy extended far beyond the classroom into the personal and professional lives of many students over their 40+ year careers.

That, in a nutshell, is the promise of a word like “legacy.” All of us, who are musicians, especially, are part and partial of every teacher with whom we have shared experiences. We have been inspired, motivated, and set upon a course that, hopefully, will inspire others after us. I know that personally, I had a husband and wife team of band directors, who literally changed my life and set me on the course of who and what I am today.

I have attempted to portray this enduring responsibility of legacy in this setting of a hymn tune that speaks to an eternal promise.

ON A PERSONAL NOTE:

Contrary to common belief, music does not “come to us in a dream” 99 percent of the time. For me, it’s usually a slow arrival of an idea and then a frantic binge of activity to get it all on paper . . or in this day and age, on the computer screen. And this ELEGY was one of my slowest starts ever. It seemed I couldn’t find that motivic spark.

My instructions were to basically write a “hymn tune” style piece. And although I had several communications from family members, no one really had any suggestions on what hymn to use. Not knowing the McArthurs personally, I struggled with the hymn selection and finally decided on “Abide With Me” – written in 1847 by Scottish Anglican Henry Francis Lyte as he lay dying of tuberculosis. The hymn is a prayer asking God to remain present throughout life, trials and death. The opening line alludes to Luke 24:29, "Abide with us: for it is toward evening, and the day is far spent.”

It was not until after the piece was finished that I believe the purpose for selecting that hymn hit home. A young instructor at our university, whom I had had as a student years before, and who had gone on to get his Masters and DMA and had returned to teach with us at Lee, was involved in a car crash that took his life at age 28. He left behind his young wife and a four-month-old baby boy. Coinciding with the ELEGY’s Mississippi Premiere, the Lee University Wind Ensemble performed this piece in remembrance of our friend.

Perhaps, inspiration does come “in a dream,” especially when God whispers in your ear.