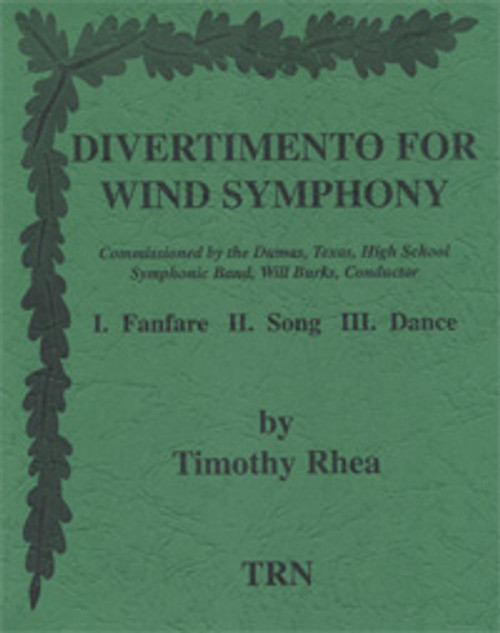 The Divertimento for Wind Symphony was composed during the spring of 1996 and was completed in the month of May. Each of its three movements attempts to capture a different spirit and musical flavor and to explore the various colors available in the modern wind band. I. Fanfare - designed to capture the listeners attention with its heavy use of brass and percussion. The movement is based on the intervals of fourths and fifths first stated in the trumpets and answered in the lower brass. It is suggested that the final gong note almost fade away before starting the second movement. II. Song - takes a simple melody and explores various instrumental colors and harmonic treatments before a final statement by the full ensemble. The movement begins and ends quiet and mysterious giving the listener much opportunity to paint their own musical picture and thoughts. Again, it is suggested to let the wind chimes and final chime note fade away before starting the final movement. III. Dance - a lively movement in rondo form designed to show off the technical ability of the band. This movement takes two themes as well as a separate motivic ability and attempts to weave them together throughout the movement before ending with an exciting coda finish.