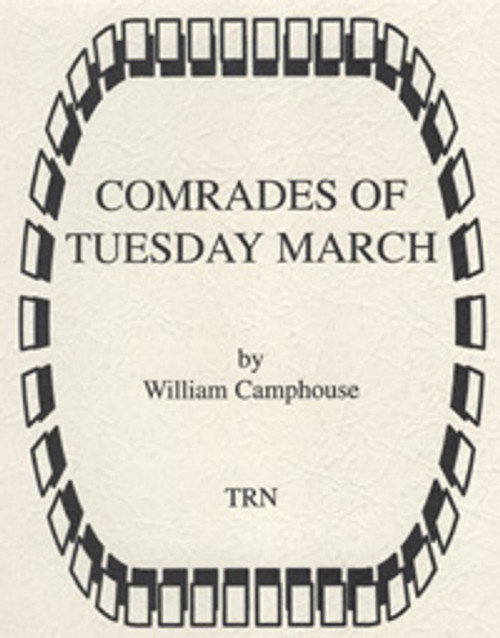 Comrades of Tuesday March is respectfully dedicated to the members of the Kaskaskia College Community Concert Band of Centralia, Illinois who exemplify the spirit of volunteerism in music making that is a vital part of the growing nationwide community concert band movement. It is written if the form of a traditional march and is intended to be performed in the style and tempo of a European march (m.m. 112-120), with close attention to contrast in articulation, dynamics, timbre, and melodic character. The introduction establishes a detached style to be maintained throughout the first and second strains. Although the melodic character and scoring create a dark sound, they are to be played with energy and clarity, especially the pickup notes and sixteenth note passages that hinge together phrases. The trio melody is to be played in a singing style (legato on the repeat) and is punctuated by a crisply articulated accompaniment. The counter melody added during the repeat should predominate and be played molto cantable. The conductor should feel free to reduce instrumentation during the repeat to achieve suitable balance. The break strain and final statement of the trio melody are indicated tutti forza demanding an assertive and detached performance style.