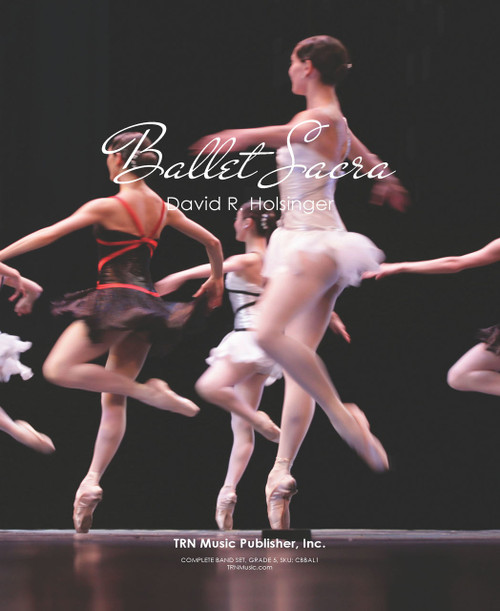 Ballet Sacra is intended as a concert piece based on universally known texts utilized in not only the Roman Catholic Mass, but also the Anglican Mass, the Lutheran Service, and the Methodist Communion Service. Although envisioned as a liturgical collaboration between dance company and symphonic band, Ballet Sacra can stand alone in its tri-part design without the visual element. Preceding the entry of the ballet corps, the composition opens with fanfares and flourishes in the brass and percussion pressing forward to culminate in large organ-like tuttis. As the tempo explodes to an ebullient Presto, the dancers are invited to enter the stage. The dance variations are presented over many meter changes and displaced accents, typical of the composer's style. "Home meter," however, during this opening exposition is four-five, somewhat unusual to accompany an art form that usually choreographs in groups of eight counts. The "B" section of this program features dances for three individuals and couples, the Pas de trois and Pas de duex. Both these dance events are performed over slow, harmonically- minimalistic music variations. This middle section features both a solo trumpet line and voices singing within the playing ensemble. Reminiscent of early liturgical chant, the composer has the singers intoning two phrases from the Gloria of the Mass Ordinary, "Gloria in Excelsis Deo" and "Quoniam tu solus sanctus". (Glory to God in the Highest / For You Alone are Holy). In the final Presto, the entire dance company is involved as the music unfolds an agitated tapestry where bits and pieces of the first two sections reappear and reassemble into a closing recapitulation of the primary themes, "home meter" being abridged to four-four. The great organ-like chords sound through the busyness, allusions of the opening "liturgical fanfares" climb upward and the listener is pounded by terse spikes of sound. The ballet concludes in quiet benediction as voices intone a final prayer; Grant Us Peace., "Dona nobis pacem". One movement. 16 minutes long.