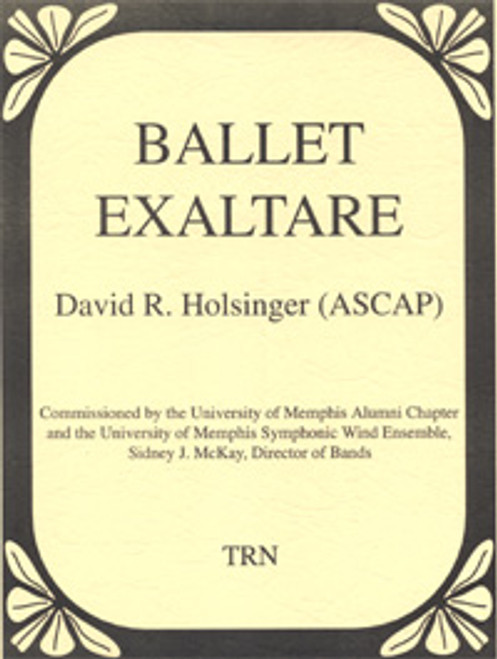 Although of similar scope as BALLET SACRA, this new composition, BALLET EXALTARE does not serve as a companion piece to the first. It has been conceived, nearly a decade later, independently, as a single movement work for dance ensemble and wind symphony. Although the piece contains fragments of the Louis Bourgeois' DOXOLOGY theme, the composition is not based on this familiar tune. These fragments simply appear as one of the unifying germative statements within the melodic fabric of the movement. Prior to this work, I had utilized the Bourgeois "Old Hundred" twice. First in 1976, in an unpublished work entitled TOWARD THE THIRD CENTURY and again in 1988, in another unpublished work called SYMPHONIC CANTICLE. Both pieces have since been compositionally dismantled "beyond repair" and portions have been utilized as building blocks to new compositions over the past several years. This work is written more in the classical sense than the "smash, crash, and rip" style I am more inclined to pursue. Hopefully, the ensemble will find here a successful composition where major themes are presented and spun through each other in an ever-growing harmonic and melodic framework that, at least, alludes to a more absolute, and to some, a more conventional compositional style. Unlike the BALLET SACRA, I chose not to designate dance ensemble inscriptions within the score, however, the sixty-six measure "adagio" at the center of the work should be considered the obligatory Pas de deux..