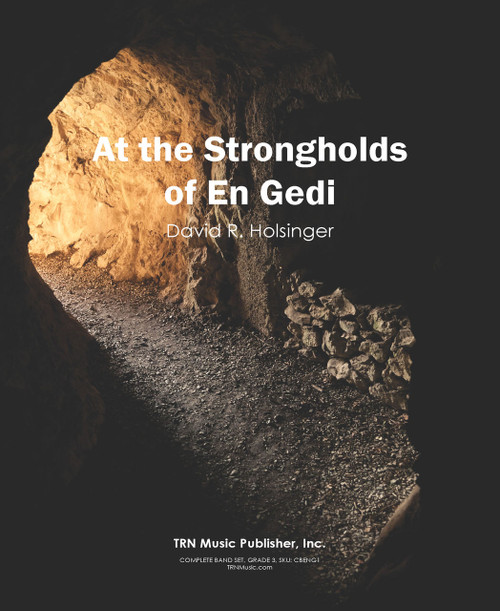 At the Strongholds of En Gedi

At the Strongholds of En Gedi

In 1995, a commissioning project proposal by Marc Blanchette, designed to implement an American Wind Music curriculum in secondary school systems was made possible by a grant from the Christa McAuliffe Fellowship Program. This program is a federally-funded foundation providing grants to outstanding teachers to enable and encourage them to continue their education, develop innovative programs, consult with or assist local educational agencies, and engage in other educational activities that will enhance the knowledge and skills of teachers and the education of elementary and / or secondary students. The culmination of Mr. Blanchette's proposal was the commissioning of 6 new pieces for wind band at different grade levels and the residency of each composer involved with the participating school system in the Rhode Island region. The composers involved in this project included Thomas Duffy, Daniel Bukvich, Reber Clark, David Maslanka, Larry Lipkis, and David Holsinger. The Old Testament book of I Samuel relates in part, the episode of King Saul's jealousy toward David and his warrior army. After surviving several attempts upon his life by Saul, David and his men fled to the city of Keilah. However, Saul intensified his pursuit and David, being warned by Abiathar the Priest that the inhabitants of the city would betray him, went into the desert region of Maon, to the caves of En Gedi to hide. It was in one of these caves that David had opportunity to kill Saul, as the King rested, but instead cut a piece of cloth from his royal robe. After being confronted with this demonstration of his deliverance from death, King Saul reconciled with David and returned home, discontinuing any further pursuit. However, for a time, David and his men chose to remain within the haven of the caves.