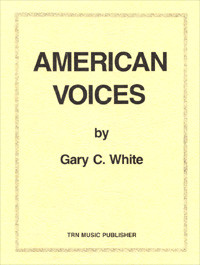 American Voices celebrates an important part of our cultural heritage: the songs our grandparents sang. These singers and their songs were preserved on recordings made by a number of collectors including: John and Alan Lomax, Artus Moser, and Duncan Emrich, which are housed in the Archive of Folk Culture at the Library of Congress in Washington. These recordings were the inspiration for American Voices. The three movements represent the various ways music was utilized by our forefathers and mothers. They sang in their homes and in community groups for entertainment, religious purposes, and as a part of courtship. Many of the songs were originally brought from England and Scotland, but have been transformed into distinctly American songs by our native singers. Three of the themes of this work came from the Sacred Harp, a collection of part songs much enjoyed by people in the South. Sacred Harp singing still flourishes today in some regions of the country. American Voices reflects the spirit and style of our singers, which was often lusty and direct, but could be as refined as the best trained singers in the European classical tradition.

American Voices was the runner-up for the 1987 ABA/OSTWALD AWARD for band composition. This annual contest is one of the most prestigious and time-honored copetitions in American music. Because of its continuity, this award has produced more concert band music than any other competition of its kind. Its first winner, in 1956, was J. Clifton Williams, and other winners since include Joseph wilcox Jenkins, Robert E. Jager, Joh Barnes Chance, Fisher Tull, Roger Nixon, James Barnes, Jim Curnow, David Holsinger, Martin Mailman, and many others.