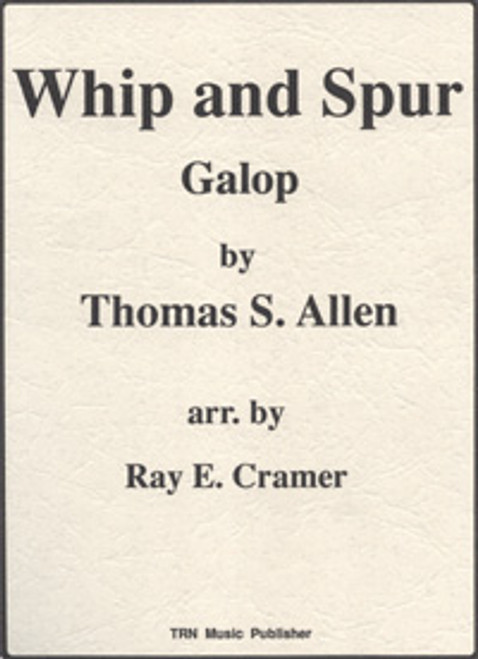 by Thomas S. Allen (1876-1919) / arr. Ray Cramer. The music of Allen reflects his life as professional musician in the world of entertainment. He was a violinist and made his debut with a professional dance orchestra in Massachusetts at the age of twenty. He later played in an Opera House orchestra in Boston. He was the business manager for Edwin G. Bates Musicians for a time, but returned to orchestra playing. Although Allen wrote a great amount of music for a variety of dances, acrobatic acts, and short dramatic sketches, most all is forgotten. Only a few rags and galops are still heard in rodeos, circuses, and concerts. Some titles still occasionally heard are General Mixup, U.S.A., Blue Streak Galop, Saddle Back Galop, Horse Marines, Battle Royal, and Majestic. Whip and Spur Galop is usually taken in one, or a very fast two beats per bar, thus it sounds "difficult." However, the notes are all quarter and eighth notes, and fall easily under a player's fingers. It is an exciting little galop, fun to play and certainly fun for the audience to listen to.