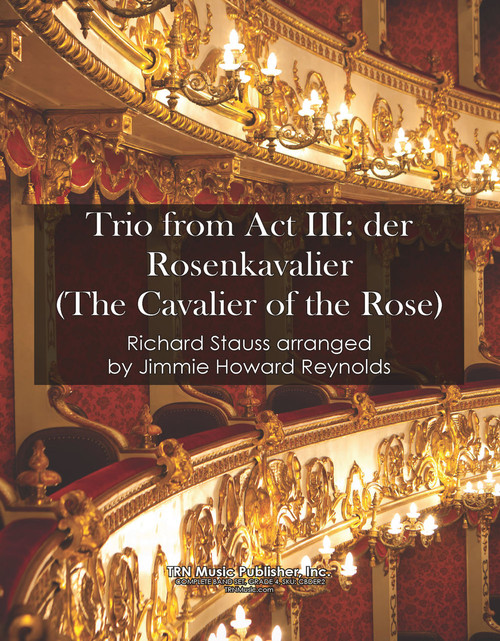 (The Cavalier of the Rose) by Richard Strauss/ arranged by Jimmie Reynolds. The opera Der Rosenkavalier (The Cavalier of the Rose) was first performed in Dresden in 1911. The book or libretto is by Hugo von Hofmansthal. The story of the opera is too complex for this limited space, but the trio from Act III is , in itself, a magnificent example of the genius of the Strauss/Hofmansthal collaboration. To Strauss's rich orchestration, it is sung by Sophie, a pretty young woman - Octavian, a young man, and the Countess, a mature and sophisticated woman. Almost all of the vocal lines are contained in Strauss's original orchestration and faithfully retained in this transcription. In brief, this music describes, as only music can, the relationship between Octavian, Sophie, and the Countess. Octavian has enjoyed a long relationship with the Countess, but he, after meeting Sophie, has discovered his true love. While Sophie and Octavian sing of their new found happiness, the Countess remembers the tender moments of the past, is grateful for them, but recognizes the need to let Octavian and Sophie go the way of youth. Sophie, though absorbed in her lover for Octavian, and the Countess, realizing that she is indeed growing old, seem for a brief moment to recognize, because of their love for Octavian, the bond between themselves, and understanding transcending the emotions of the moment. Both the eight bar introduction and the coda following the oboe solo are derived from notes contained in the principal motive of the opera. In rehearsal and performance, it is important to remember the urgency and passion with which this music carries us on. The Tempo is not constant and is really not very slow. The conductor is urged to utilize, in his or her teaching, the many fine recordings of this work, both full opera, and the excellent Der Rosenkavalier Suite arranged by Antal Dorati.