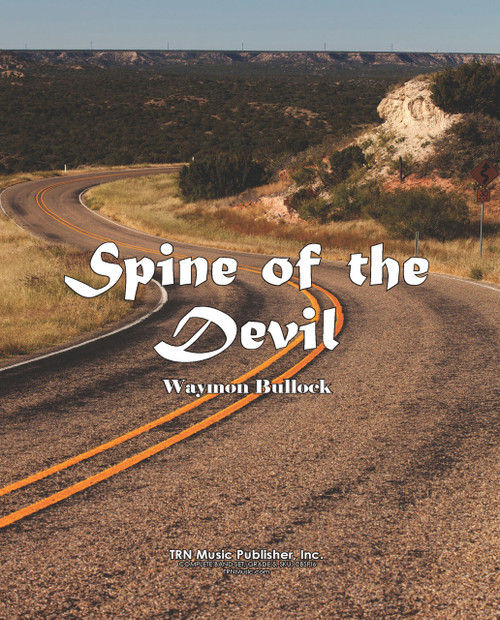 Spine of the Devil (March)

Spine of the Devil (March)

Mr. Bullock has a particular fondness for the quickstep march as a form. This march, "The Spine of the Devil," was written in 2000, and is evocative of the great marches written to showcase the power and color of the modern concert band. The original Spanish title "Espinazo del Diablo" is translated to "The Spine of the Devil" and draws inspiration from a visit by the Bullock family to one of Texas' most scenic drives known locally as the "Devil's Backbone". Officially F.M. 32, the "Devil's Backbone" is a winding razor-backed ridge overlooking Hill Country vistas. It extends from F.M. 12 just south of Wimberly and west some 24 miles to near Blanco. The march, in easy band keys (Bb/Eb) and in standard march form, starts with a strong G minor chord followed by an octave-long chromatic scale and musical features that set the stage for the winding, twisting, musical road that follows. It features a strong low brass lead in the first strain with woodwind flourishes and a second strain full of low brass scales followed by high brass / woodwind "fun to play" embellishments. After the standard key change at the trio, the woodwinds and French horns state a very plaintive melody in the low register, which is followed by a soaring euphonium counter melody in its second exposition. After the break strain, which is reminiscent of the introduction, the march concludes with all forces displaying the energy and vitality associated with the march.