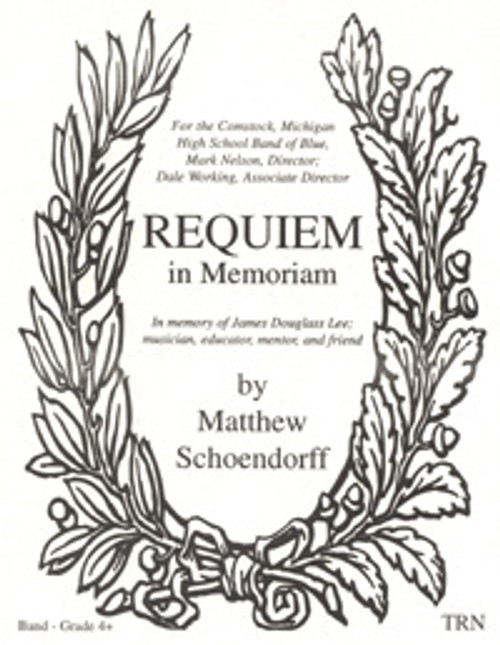 As a musician, James D. Lee (1946-2001) demonstrated a passion for his art unparalleled by anyone I have ever known. As an educator, he taught with the vigor and strength any teacher would be lucky to have. As a mentor, he was a respected example and role model for every young musician who knew him. And as a friend, he was the greatest of companions.

This work for wind band attempts to capture and exemplify the attributes that made Mr. Lee who he was. Mr. Lee was my first music teacher, giving me private euphonium and tuba lessons. He also gave me my first instructions in composition. He was my first conductor as well. I was under his direction in the Flint Youth Wind Ensemble (Flint, MI) for five years. It is because of him that I am not only a musician today, but also the musician that I am.

In May, 1999, James Lee was diagnosed with terminal brain cancer. He fought bravely, continuing his work as Professor of Music at Mott Community College in Flint, MI and as conductor of the First Youth Wind Ensemble into the final months of his life. He finally passed on July 18, 2001, and the music profession lost one of its greatest assets that I have ever known.

In writing this piece, I attempted to honor Mr. Lee in the best way I knew how, with a composition written for an ensemble I grew to love as much as he did, the wind band. Much of the thematic material in this piece is taken from the Latin Requiem Mass, especially the Introit, Dies Irae, and the Lux Aeterna. The piece also contains a hymn-like melody that I associate with the gentle strength Mr. Lee so often imbued. With these elements as motivic material, the piece works through the five stages of grief. It begins with quiet reflection and denial, moves through anger and bargaining, depression, and, finally, acceptance, ending with a sense of hope. The construction of this work is especially meaningful to me, as I found myself working through each stage as I wrote it.

Requiem In Memoriam was written for the Comstock, MI High School Band of Blue. This second dedication is also quite appropriate, as the director, Mark Nelson, was also a former student of James Lee. Both he and I are simply carrying on a passion for music we once saw burn greatly in a man we will never and cannot ever forget. -- Matthew Schoendorff, 2001