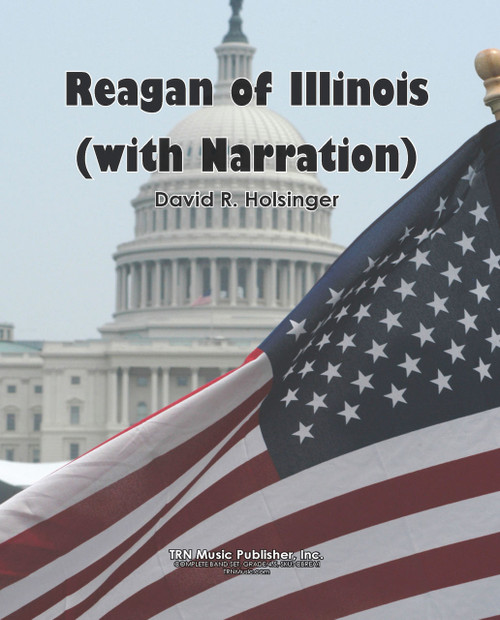 Reagan of Illinois (with Narration)

Reagan of Illinois (with Narration)

Although born in nearby Tampico, Illinois, Ronald Reagan moved with his family to Dixon, Illinois when he was nine years old. In many of his speeches and writings, he always referred to his growing up in Dixon and the many life lessons he learned in those formative years. As far as the 40th President of the United States was concerned, Dixon, Illinois, was his hometown.

To celebrate the President’s 100th Birthday remembrance on February 6, 2011, the City of Dixon commissioned this work for Symphonic Band and Narrator, as a gift of love from his hometown. The narration, gathered from his autobiography, “Ronald Reagan, An American Life” takes us from his initial remembrances of Dixon to his first audition with Warner Brothers Studios in 1939. As with his delightfully written reminiscence, the composition is laced with gratitude, fond recollections, and humorous anecdotes concerning his years growing up in the Illinois farmland. (Admittedly, one of the more delightful moments in the compositional process for me was a chance to do a little historical “borrowing,” incorporating not only the beautiful Illinois State Song, but also the 1930’s era Eureka College Hymn and the Eureka College Fight Song, the very tunes probably heard by a young football player named “Dutch” Reagan while attending college there.)

I was pleased to be offered this opportunity to honor this well-loved President.