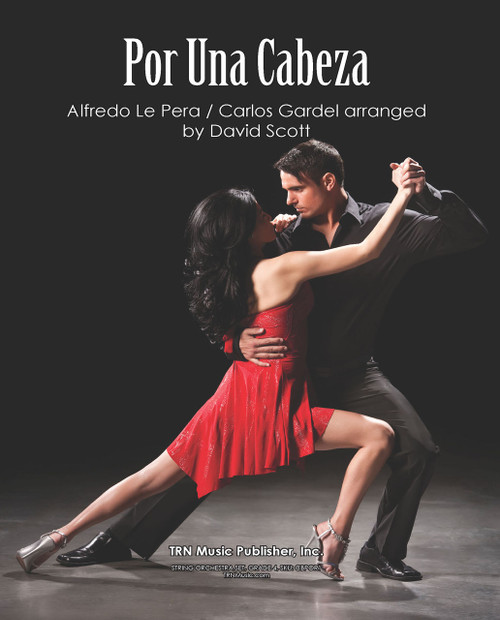 For most listeners, Por Una Cabeza is THE iconic tango. It has been used in at least eight movies, including Scent of a Woman, Schindler’s List, and Titanic. It was written in 1935 by Carlos Gardel and Alfredo Le Pera, both of whom died tragically in a plane crash later that same year. The song is the lament of a man who lost all his money betting on a horse race (por una cabeza means “by a head,” the amount his horse lost by), and also lost the woman he loves.

This tango gets its power from the almost schizophrenic contrast between the sweetness of the major section and the fiery passion of the minor. Emphasize this difference as much as possible by changing the vibrato, bow contact point, and bow pressure to create different tone colors. Let the pizzicatos in the lower strings ring, like a harp or chorus of guitars. Don’t be afraid to slide between notes in the melody when it seems appropriate. For example, a juicy slide between the B flat and the D in measure 13 would be very tasty. The conductor or concertmaster should choose where the slides should be, so that there is some uniformity throughout the violins – the music should sound free and effortless, but it takes tight ensemble to make that happen. The violin solo (m. 32) should sound free and improvisatory. Use lots of rubato, a giveand- take feeling in the rhythm.