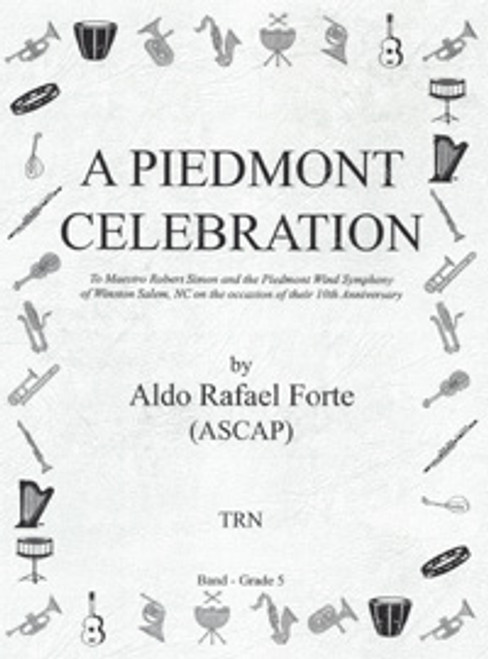 A Piedmont Celebration was commissioned by and is dedicated "To Maestro Robert Simon and the Piedmont Wind Symphony of Winston-Salem, NC on the occasion of their 10th Anniversary". Maestro Robert Simon contacted me in 1999 about composing a work for his band's 10th Anniversary. This wonderful ensemble had previously performed my music and was one of the first groups to give a post premiere performance of my Van Gogh Portraits, a work also published by TRN. Therefore, I was well acquainted with their musical excellence and was thus delighted to accept the commission. Robert and I discussed the parameters of the piece and I set out to compose it. The Piedmont Wind Symphony (PWS) premiered A Piedmont Celebration on November 2, 2000 in the Brendle Recital Hall at Wake Forest University in Winston Salem, North Carolina and subsequently released it as the title cut of a CD in May 2002. The composition was written during the year 2000. A Piedmont Celebration is approximately thirteen minutes in length and is cast in three movements. The material for all the movements is derived from similar intervallic relationships.