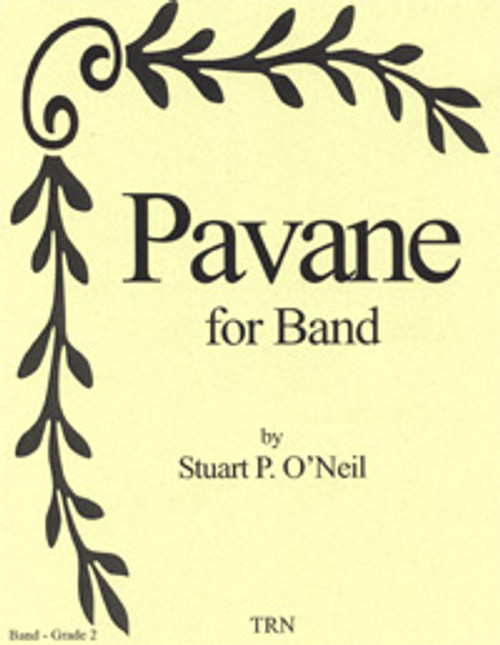 A pavane is a slow, stately dance of Italian or Spanish origin. In following with this tradition, Pavane for Band creates a musical statement in which the beauty of the piece comes entirely from its straightforward elegance and simplicity. While not technically difficult, this piece is musically challenging and is appropriate for ensembles of all ability levels. The texture of Pavane for Band is generally contrapuntal; players should strive to bring out the linear quality of each part while working to ensure that the melody, which is first presented by the clarinets and then passed to the flutes and oboe, is clearly heard. In addition to the indicated phrases, the entire piece should be performed in a connected, legato manner and with dark tone color from all instruments. Dynamic contrasts are generally accompanied by changes in the scoring; players should strive to maintain strong breath support throughout the entire piece, especially the soft passages. While the piece should be performed with a steady pulse, slight pauses prior to the phrases beginning at measure 17, measure 25 and measure 33 are appropriate. The AABA musical structure repeats at measure 25, at which point the texture becomes thicker as the initial theme, now presented by the trumpets, is accompanied by the upper voices playing a variation that is staggered by one measure. The upper voices eventually take over the melodic line at measure 33, and the ensemble plays tutti to the end. Middle A and B-flat tend to be sharp notes for young clarinet players; this is especially unfortunate when one of these notes functions as the major third of a chord (which should ideally be lowered 14 cents for natural tuning) as the A does in this piece. Have the players experiment with lowering these pitches by putting down right hand fingers. Also, encourage the trombone players to experiment with playing high D in fourth position instead of first; depending on the surrounding notes, fourth position may be smoother.