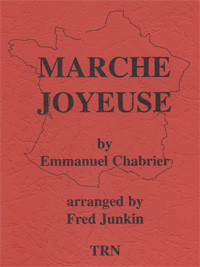 by the French composer Emmanuel Chabrier (1841-1894) / arranged by Fred Junkin. Emmanuel Chabrierwas born on January 18, 1841, in Ambert, Puy-de-dome, France. At the age of six, he began to play the piano, taught by a Spanish refugee named Saporta. At ten, he was sent to the Lycée Imperial at Clermont-Ferrand to study accompanying with violinist Tarnowski and began to try his hand at composition. In 1858, he began the study of law, while also continuing his music studies. He entered the employee of the Ministry of the Interior in 1862 serving the government for 18 years, at the same time cultivating his musical tastes with Duparc, Vincent d'Indy and others with whom he formed a private group of music lovers.