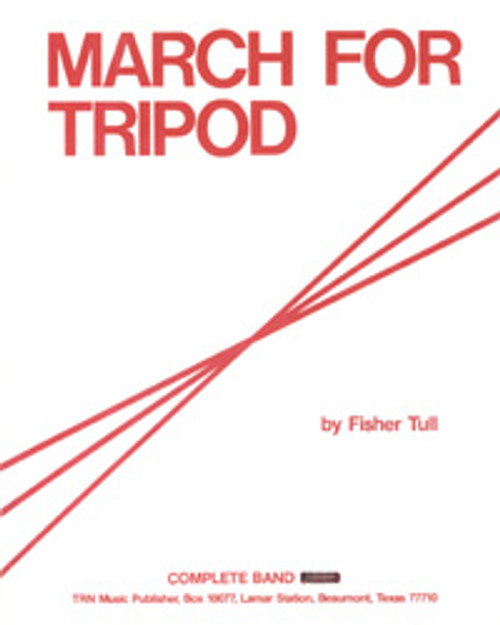 Tripod was a mustard-colored mongrel dog with a lame left-front paw who wandered onto the campus of Sam Houston State University around 1948 and was adopted by the student body as the unofficial school mascot. During his fourteen year reign, he had no master and no permanent home, but he enjoyed all privileges of the campus community including free room and board in virtually any dormitory or apartment. Tripod wore his laurels reluctantly and played no favorites. As president, Harmon Lowman said at Tripods funeral in the winter of 1962, He was independent to begin with, and he was never changed by the affection and attention displayed by the students. He formed no attachments; you fed him and he wagged his tail and moved on. He always moved on. Tripod liked the crowds at football games and seemed to enjoy band music. Unfortunately, he had difficulty adapting his gait to the marches designed for two-legged creatures. For all the Tripods in the world, this march was written to allow them the opportunity to join the parade.

Maintaining the proper tempo throughout this march is essential toward capturing the intended spirit of humor and satire. Players should employ a clean, crisp staccato style and sudden changes in dynamic levels should be exaggerated. A parody of the standard march, roll-off occurs in the percussion section in mm. 16, 36 and 68. In these instances, the snare drum part may be doubled by a larger parade drum, and a pair of small antique cymbals may be added to the triangle part.