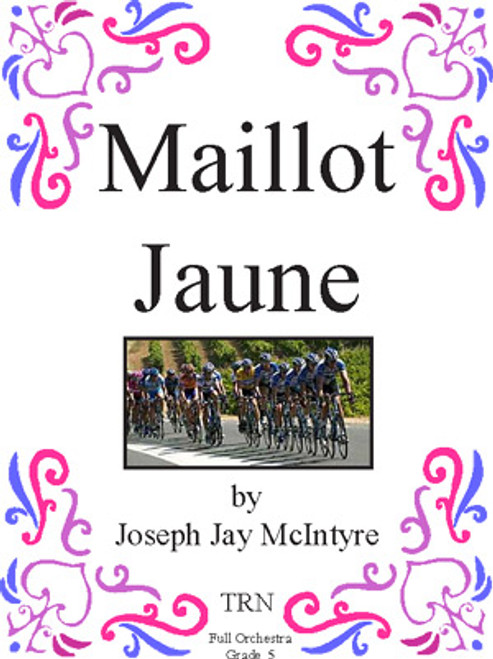 Every July in France, the world's best cyclists compete in the famed Tour de France bicycle race, covering over two thousand miles in 21 separate stages. The "Maillot Jaune" is the coveted yellowcolored jersey worn by the overall leader of the race. I was fortunate to have been in France and witnessed the American champion Lance Armstrong win his record-breaking seventh victory in 2005. While still in Paris, I was asked to write a new piece for the Maryland Classic Youth Orchestra's 60th anniversary. My immediate thought was to give the new piece the same sense of victory and celebration that I had just experienced. Maillot Jaune is written in three movements, each representing a specific stage of the Tour. Movement One, Prologue, is a rousing introduction, featuring antiphonal trumpets playing from the left and right balconies. Movement Two, Alpe d'Huez, is named after the most grueling mountain stage of the bike race. In this movement every section of the orchestra plays a cat and mouse chase theme depicting the cyclists exhausting race to the finish line at the summit of Alpe d'Huez. Movement Three, Champs Élysées, exemplifies the pomp and celebration of the final parade laps through the streets of Paris. Here, the music is rhythmic and triumphant with a true sense of celebration.