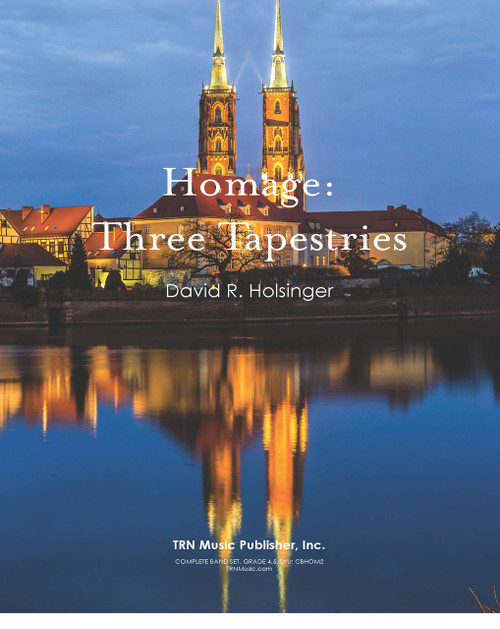 I was asked by Kenny Bierschenk to compose a piece for his band that would to a large extent based on themes found in the great liturgical musical wealth of the Roman Catholic Church. Kenny, himself, suggested one such hymn chant that he remembered as one of the most beautiful songs sung in his boyhood church in Weatherford, Texas. The first movement of this three part tapestry is based on a melody I heard sung at a local cathedral in Kathowice, Poland, on one of my trips to that country in the early 90's. I had stepped out of my host's home to walk about a square close by. I was drawn to this large church because I heard what sounded like a men's chorus singing. It was in fact only a small robed group of men obviously practicing in an alcove of the hall. I don't know the name of the melody, and what I have written is more a vague remembrance of the tune, but it impressed me as being a very "strong" melody and I think I have come close to its ambiance. The second movement is based on a theme by Thomas Aquinas (1227-74) entitled Pange Lingua. This is the melody Mr. Bierschenk remembered as "Praise We Christ's Immortal Body". In 1966, when I was a 19-year-old college junior, Vaclav Nelybel came to our school to guest conduct over a three-day tour in western Missouri. Three concerts a day he conducted Trittico and his Chorale. He was a mad man on the podium. His eye blazed with energy. His baton was like a sabre, slashing the air, tearing the wind with his music. at the end of the three days . . . at the close of the final concert . . . as the audience finally departed and my colleagues left the stage, I sat alone in my section, physically exhausted, mentally drained, and emotionally spent. And I wept . . . knowing that in those few days, I had discovered what was to become the musical passion of my life . . . I was to compose. The third movement is based partly on the medieval Bohemian chorale to King Wenceslaus used as source material by Nelybel in several of his most passionate works. I have written Homage: Three Tapestries in a compositional genre directly alluding to the style of Vaclav Nelybel. I do this, not to copy, but to praise. I do this to say Thank You for the inspiration he gave a generation of musicians like myself.