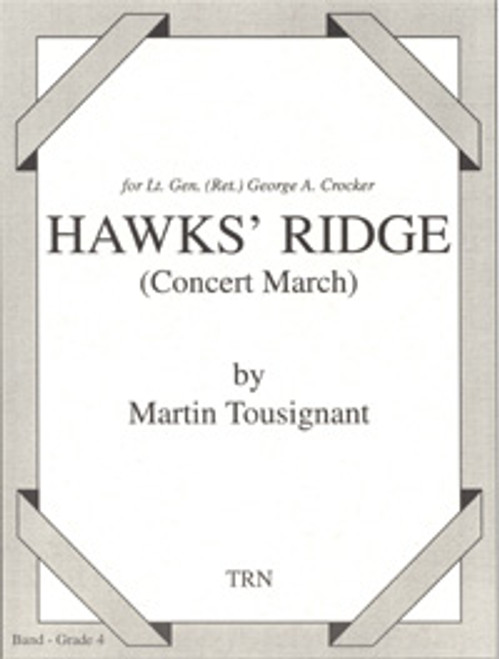 I wrote Hawks' Ridge to honor Lt. Gen. George Crocker, former Ft. Lewis, Washington post commander, upon his retirement in September, 1999. It shares its trio D. S. form, key signatures, and certain motifs with W. Paris Chambers Falcon (1908). As a concert band march per se, its chord progressions, dynamics, and textures encompass a broader spectrum. The exact tempo will depend upon the ensemble and acoustic environment. I prefer a constant tempo throughout with the lead instruments taking slight expressivo liberties. The single grace notes in the trio (m. 44-59) and trio D. S. (m. 80-95) should be played slightly before the beat like snare drum flam rudiments. The double grace notes should be played crisply on the beat like snare drum drag rudiments. Both trills in the break strain (m. 66 and 74) are played upward to the next scale degrees. N. B. Since the opening pickup note is difficult to realize as an ensemble, I would recommend conducting the entire first measure. This work requires all standard concert band parts except double reeds and low reeds (cued as needed). The mallet percussion parts, if played, will naturally dominate the woodwinds. The snare drum, bass drum, and crash cymbals should accompany, not dominate the ensemble. Normally play cues only if the primary instrument is unavailable, with two exceptions as follows: Double the low clarinets with the alto saxophones from m. 30-39 if the resulting chords do not balance, and double the horns with the tenor and alto saxophones from m. 43-59 if needed. God bless you and your ensemble. Martin Tousignant / Herndon, Virginia / April 2, 2003