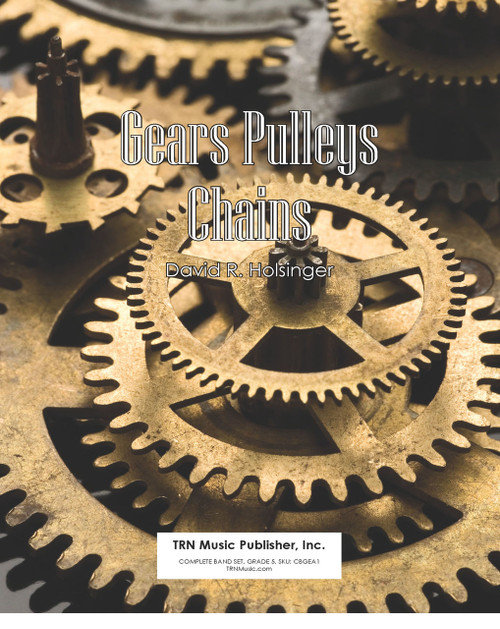 Gears Pulleys Chains was composed on commission for Lisa Baker's marvelous ensemble, the Shelby High School Symphonic Band of Shelby, Ohio. The piece is dedicated to Jack F. Gray, retired Director of Bands, and honors him for his 30 years of teaching in the Shelby City Schools. My exploration of this municipality's diverse history actually inspired this work. When I first went online to Shelby's Chamber of Commerce website, I was taken with a little sidebar concerning the Shelby Moter Car Company, which existed from 1901 to 1903. As I pursued that historic avenue, I soon discovered, among other things, that Shelby, Ohio, is considered the birthplace of the seamless steel tubing industry in America, dating from 1890. The Shelby Tractor and Truck Company existed from 1918 to 1922, thanks in part to its government order for 150,000 shrapnel shells. (Obviously a tool for the REALLY serious farmer!) Of course, they also produced tractors, including the only still existing Shelby Tractor Model D-12-25HP that has been restored to running condition by Fred McCance in Lyons, Ohio. The Shelby Bicycle Company was also founded late in the 1890's, and a number of its models are classics in the Bicycle Hall of Fame. They include the 1929 Lindy Bicycle, commemorating Lindberg's transatlantic solo flight, and the 1949 Donald Duck bicycle with Donald's head on the fork crown. I'm serious when I tell you that Donald's eyes flashed and served as headlights, and the electric horn went "quack, quack"! Shelby has the dubious distinction of being the birthplace of bubble gum, but to be honest, I didn't relish the idea of my name and the term, "bubble gum music" being linked in the same sentence, so I have reverted to the mechanical history of Shelby for my inspiration. GEARS PULLEYS CHAINS celebrates the Shelby, Ohio, fingerprint in the "Machine Age" of America.