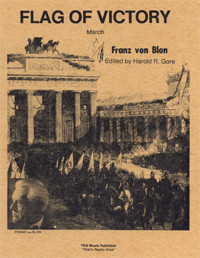 From the early 1800's almost until the time of World War Two, German march music was basically written for the parade ground. Although they served this purpose admirably, they were not so well suited for concert use. In the late 1800's, some notable composers began to write marches of the "concert" type. One of the first was Julius Lehnhardt, but the man who brought this style to its highest peak in those days was Franz von Blon (1861-1945). Professor H. Schmidt, a famous Inspector (overall commander) of Music of the German Army Bands, had this to say about von Blon's marches: "It is the merit of Franz von Blon to have showed new ways for the German Army march. He gave it a richer harmonic attire; his marches are truly modern, and as the first composer to do so, he included an unrivaled brilliant interlude in the trio, thus enabling a most effective introduction to the repetition of it."