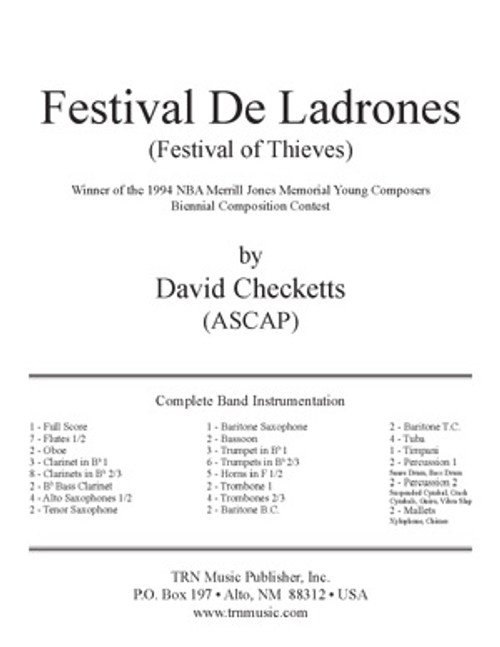 Festival De Ladrones (subtitled in English as Festival of Thieves) was inspired by the many hours I spent as a child watching westerns with my father. Early in my childhood I was exposed to The Cowboys, The Magnificent Seven and True Grit. Later on it was Pale Rider and Silverado.

Festival is a depiction of a group of bandits on the run from the law. The first section is rather fast with a driving snare drum rhythm and punctuated hits from the ensemble as the trumpets play the main theme.

The second section is much slower and has alternating time signatures that give it an uneasy feeling at first.

The third section is a Mariachi dance movement in which our unlikely heroes celebrate their escape from their pursuers with a Fiesta. It is most important that the Guiro is played correctly and consistently, throughout this entire section as it is the instrument that ties the time changes together with a hemiola.

The coda cannot be played too fast. The tempo should be at least quarter note equals 160 and preferably around 170.