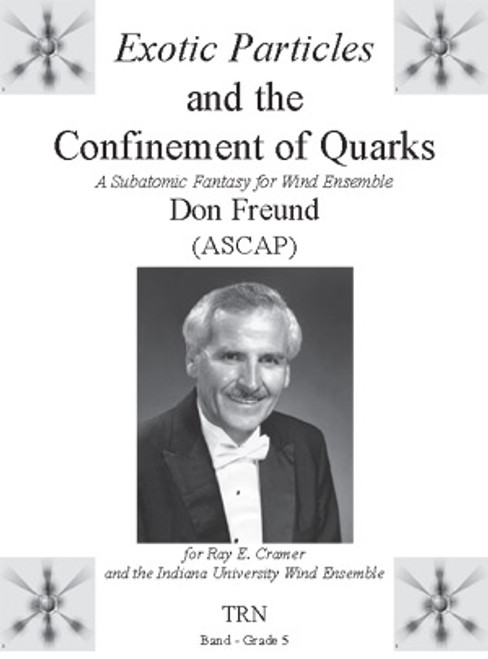 In April of 2004, Indiana University Physics Professor Alex Dzierba presented his Distinguished Faculty Research Lecture: Exotic Particles and the Confinement of Quarks. Within the proton's hot, bubbling cauldron of activity, quarks and glue move at nearly light speed and quarks and anti-quarks pop continuously in and out of existence. When pried even one proton's width apart (less than one trillionth the size of an atom), quarks experience ten tons of force pulling them together. Quarks are so small that we have not been able to measure their size; they take up less than one billionth of the space inside the proton. Particle accelerators can blast quarks out of a nucleus, but within much less than a billionth of a nanosecond free quarks join with newly created ones and brand new particles are formed. Now, thanks to the marvels of modern compositional technology, we are able to expand the world of the quark billions of billions of billions of times to produce an aural replica encompassing eight minutes of time and the space and sound range of a large wind ensemble. It is thus possible to hear evanescent particles come into being and disappear, massless neutrinos passing through, and even the moaning low brass of the confined quarks. We are amazed to discover that at this magnification one can even hear the passing of time in bits of a Morse code mantra that seems to take on a syncopated groove. At one point the violent batterings of colliding particles threaten to break this world apart but the superpowerful force of gluon surges to bring things back together. The depictions and accounts presented in this work are solely those of the composer, and in no way is the IU Department of Physics responsible for their accuracy. Furthermore the Department of Bands cannot be held liable for any disfiguring of the listener's psycho-acoustic physiology created by the use of the lion's roar or androgynous C triads (with a quarter-tone third.) Exotic Particles and the Confinement of Quarks was written in celebration of the tenure of Ray E. Cramer as IU's Director of Bands as he prepares for his retirement, which we suspect will be superactive, exotic, and wonderfully quarky. *Paraphrased from a flyer provided by the Jefferson Lab (the Thomas Jefferson National Accelerator Facility.) Bona fide information about Alex Dzierba and his research can be found at http:// dustbunny.physics.indiana.edu/~dzierba/