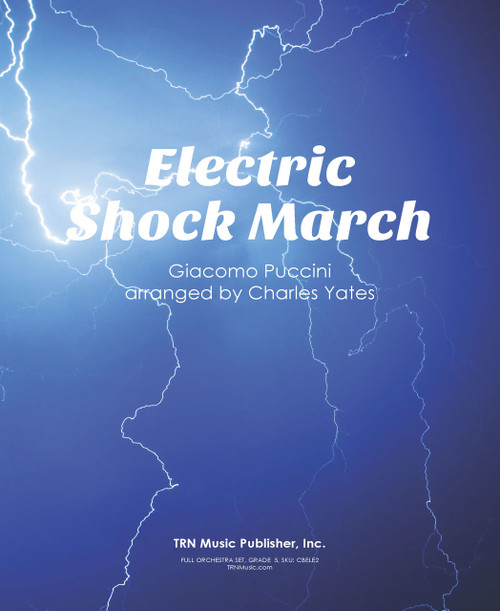 HISTORY OF THE PIECE:

The “Electric Shock” was performed in Como, Italy and dedicated to Alessandro Volta of “battery fame.” It’s a brief Italian style march that depicts vibrant “electric shocks,” performed by the percussion section executing rim-shots in the last refrain.

Puccini: The San Diego Connection, By Nicolas Reveles, Director of Education and Outreach

“When San Diego State University music professor Charles Yates took refuge from a storm in a music library in Lucca, Italy four years ago, little did he know that his scholarly curiosity would lead to the discovery of a work by Giacomo Puccini that was completely unknown and had not been performed since 1899! The piece, a march for solo piano entitled “Scossa Elettrica, Marcetta Brillante” (The ‘Electric Shock’ March), was written by the composer in honor of Alessandro Volta, the Italian scientist who invented the electric battery and who was being feted at a turn-of-the-century international conference of telegraph operators in the city of Como.

It was probably performed only once for the conference, perhaps once again in 1910 and then filed away by the composer until discovered by Professor Yates. The librarian wouldn’t allow the professor to photocopy the piece, afraid of damaging the manuscript, so our intrepid scholar found a local camera shop, borrowed a camera and some high-speed film, and safely photographed it so that he could bring the work home with him. Since then Professor Yates, with the permission of the estate, has scored the work for concert bands and has had it premiered by the University of North Texas Wind Ensemble in Texas and by the Goldman Memorial Band in New York City. This arrangement for full orchestra was one of the last arrangements by Charles D. Yates.

The most interesting feature of the work is a ‘free’ section for percussion towards the end which imitates the random sound of bolts of electricity. Considering that Tosca premiered in 1900, one wonders how Puccini found the time to toss off this super-charged piece of music. Congratulations to Professor Yates on his important discovery and for making a San Diego connection to the composer whose music we enjoy at this performance!”