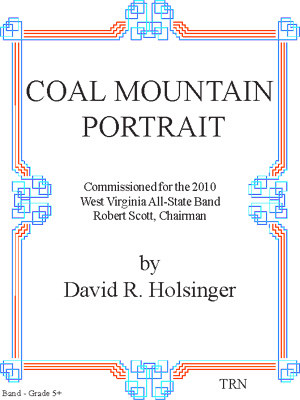 Maybe because I’m a model railroader and “railfan,” I’m aware of those states that are big “railroad” states. To me, West Virginia is all about two things: coal and railroads. Twenty some railroads had their origins in the coal country of West Virginia.

COAL MOUNTAIN PORTRAIT is, to much extent, inspired by the history of Page, West Virginia.

Page is an unincorporated town in Fayette County, West Virginia. It was named for William Nelson Page (1854-1932), a civil engineer and industrialist who lived in nearby Ansted, where he managed Gauley Mountain Coal Company and many iron, coal, and railroad enterprises. William Page owned a coal and coking company at Page and was the first president of The Virginian Railway Company, now a part of Norfolk Southern.

In 1896, Page founded the Loup Creek and Deepwater Railway, a logging railroad connecting a sawmill at Robson with the Chesapeake and Ohio railway (C&O) at Deepwater on the Kanawha River. In 1898, it was rechartered as the Deepwater Railway, with plans to extend to nearby coal mines at Glen Jean. The town of Page became one of the earliest stations on the expanding Deepwater Railway. Around 1903, it also became the location of Page Coal and Coke Company.

In 1902, William Page enlisted the support of millionaire industrialist Henry Huttleston Rogers as a silent partner to finance the expansion of the Deepwater Railway much further, about 80 miles through Mullens to reach the Norfolk and Western Railway (N&W) at Matoaka to open up new territory with untapped deposits of high volatile bituminous coal.

As construction of the expanded line got underway, William page was unsuccessful in negotiating fair rates with either major railroad; thus, he and Rogers quietly expanded their plans again to build all the way to the sea, forming what became the Virginian Railway in 1907, completed all the way from Deepwater to Sewell’s Point on Hampton Roads in 1909.

Page became the site of a switching yard, roundhouse, and station on the Virginian Railway (VGN). During the first half of the 20th century, it was a busy place. However, after the railroad eliminated steam locomotives in 1957, and the existing coal mines had been largely depleted, most of the facilities and personnel at Page were unneeded. The VGN was merged into the Norfolk and Western Railway in 1959, which itself became part of Norfolk Southern in 1982.

I was inspired by the power of the railroad and melancholy history of the valley. To me, it summed up the historical essence of the state. Like I say, It’s my impression. The music it inspired? It is what it is.

DAVID R. HOLSINGER (b. 1945) serves Lee University, Cleveland, Tennessee, as conductor of the Wind Ensemble and Professor of Music. Biographical information can be found at www.davidrholsinger.com