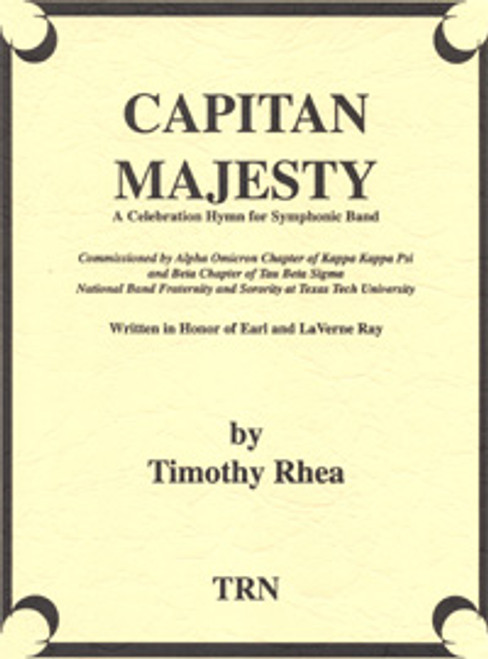 Capitan Majesty was commissioned in the spring of 1997 by the Alpha Omicron Chapter of Kappa Kappa Psi and the Beta Chapter of Tau Beta Sigma of Texas Tech University. The piece was written in honor of Mr. and Mrs. Earl Ray. The premiere performance took place on the campus of Texas Tech University on April 28, 1997 with Timothy Rhea conducting the Texas Tech University Concert Band, Keith Bearden, Conductor, augmented by antiphonal brass of the University Symphonic Band, James Sudduth, Conductor. About the music - - - The entire piece is based on an original hymnlike melody which is stated in solo euphonium at bar 10. The euphonium was the instrument of Earl Ray. From the opening percussion which is to display a since of mystery, the hymn is treated in various settings before a full ensemble statement occurs at bars 141. Options at 141 include the organ part. Also, antiphonal brass may be added from bar 143 to the end in 2 groups of seven (3 trumpets, euphonium, 3 trombones). If this option is taken, the antiphonal brass players play the written parts from 143 to theend with the band leaving out measures 148 and 149 / 154 and 155. Both the organ and antiphonal brass are optional.