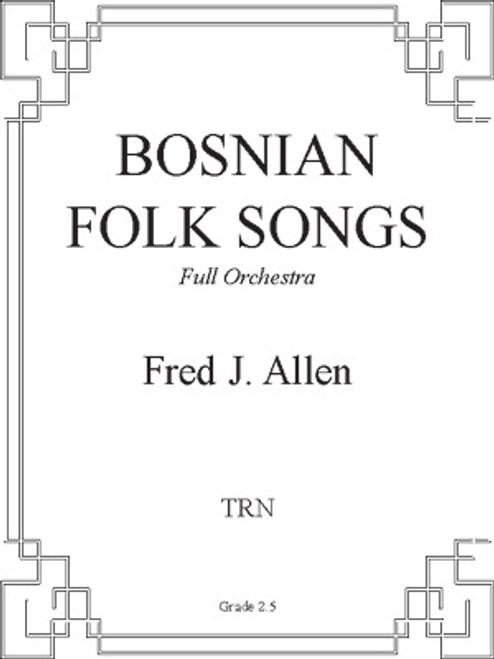 When Hungarian composer Bela Bartok (1881-1945) collected the folk music of Yugoslavia in the early part of this century, he noted the ethnic origin of each tune. This is fortunate for us, because now Yugoslavia has been divided by strife into separate nations, one of which is Bosnia. Though there are several tunes identified as Bosnian in Bartok’s collection, only two are used in this setting. The first occurs in the clarinets in measure 7, and is only four bars in length. The other tune occurs in the solo 1st violin in mm. 44-47. All other material is original and was written to bind the two folk songs together in this piece.

The tempo at the beginning is not fast, but should not drag either. At m. 42, the tempo should be slightly faster and the overall style calls for more of a “lift”. At m. 67, return to the opening tempo. At m. 75, the upper woodwinds, mallets and snare drum should be light and lifted in style, while all the remaining instruments are playing longer values with slight spacing.

This full orchestra setting of Bosnian Folk Songs was adapted for the Stephen F. Austin High School Orchestra conducted by Carolyn Vandiver by the composer from the original work for concert band. The work draws attention to the suffering of the young people in Bosnia during the Bosnian War of 1992-1995. Perhaps this music can remind us that even war cannot silence the joy that can be expressed in the simple folk songs of a nation. The text of the first folk song begins as follows:

“By Sarajevo there’s a green garden. In that garden there’s a well of cold water, By the well, a marble stone, On the stone, an aged vase, In the vase three flowers bloomed.”

This transcription for full orchestra was made directly from the score of the original band version. Percussion parts are virtually unchanged, and it is rhythmically and harmonically identical to the band version. Although all of the wind parts are necessary to give the setting its full complement of colors and voices, by using cues, it can be effectively performed with a smaller group of wind instruments: one flute, one oboe, one clarinet, one bassoon, one horn, one trumpet, one trombone and one tuba.

If the number of percussionists is limited, cover the parts in this order: tambourine/triangle/cymbals, bells/vibes, timpani, snare/bass drums. All percussionists should be sensitive to the different dynamic spectrum typical of an orchestra, and they should perform more softly than in the band setting. The saxophone solo has been retained from the band version, but it is cued in the oboe and 1st violin if no saxophone is used.